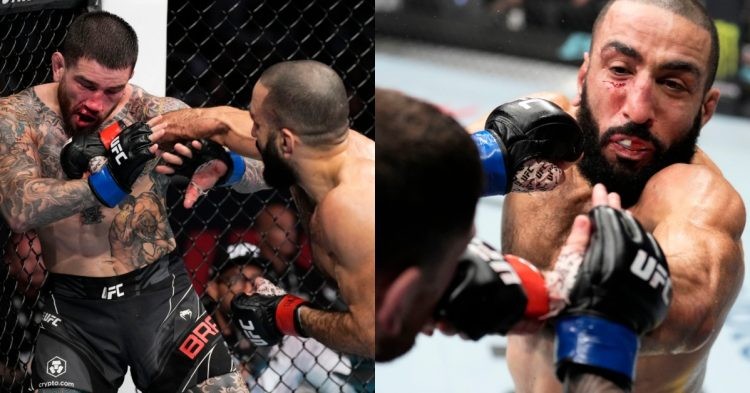 Belal Muhammad made his return to the Octagon at the UFC 280 prelims. In the main event of the preliminary card, he fought Sean Brady who was an undefeated prospect in the welterweight division. While Muhammad had a record of 21-3, Brady had a perfect record of 15-0. Fans were really interested in the fight as both were elite grapplers.

However, Muhammad did not have the best finishing record. With only 1 submission and 4 KO/TKO wins, Belal was not expected to put Brady away. In his 8-fight unbeaten streak, the 34-year-old only had one finish, which saw him submit Takashi Sato at UFC 242 in September 2019.

The Welterweight division will be watching closely 👀

The 29-year-old Sean Brady had a much better finishing rate. Out of his 15 wins, Brady had 7 finishes with 3 KO/TKOs and 4 submission wins. On paper, he was much better about using his grappling to further the offence. So how did he fare against Belal? Was he able to maintain his unbeaten streak? Let’s find out!

Belal Muhammad vs Sean Brady did not end the way fans thought it might! Both were known for their grappling abilities and the bout ended in a knockout! The first round between the two was somewhat balanced. Although Belal had early success in the first round, Brady did make a decent comeback at the end of it.

However, as Brady went back to his corner, he was visibly irritated. The second round was a balanced one as well until the last minute. As Brady got more and more exhausted, Muhammad put on more pressure and started beating him up. At the 4:47 minute mark of the second round, the ref stopped the fight.

BELAL MUHAMMAD WITH THE HANDS! 🔥

🕶️ @BullyB170 swarms and gets the biggest finish of his career! WOWWW! #UFC280 pic.twitter.com/MlLxUfMnzY

Muhammad extends his unbeaten streak to 9 fights now and scores the 5th knockout win of his career. It also means that Belal takes away Sean’s record of being undefeated in his career. He also creates a new record as he becomes the only fighter to land 1000 significant strikes without landing a takedown.

Only two fighters in the UFC have over 900 significant strikes landed while being officially credited with 0 knockdowns:

The stoppage was certainly a memorable one as he lives upto his nickname, ‘Remember the Name.’ With Khabib Nurmagomedov in his corner, Belal has shown a different side to him, a side that looks ready for a title shot.

Incredible fight. People should respect what belal does everytime he steps in a cage. A man of plans

Damn he got hands

What do you make of the performance of Belal Muhammad? Let us know in the comments down below,