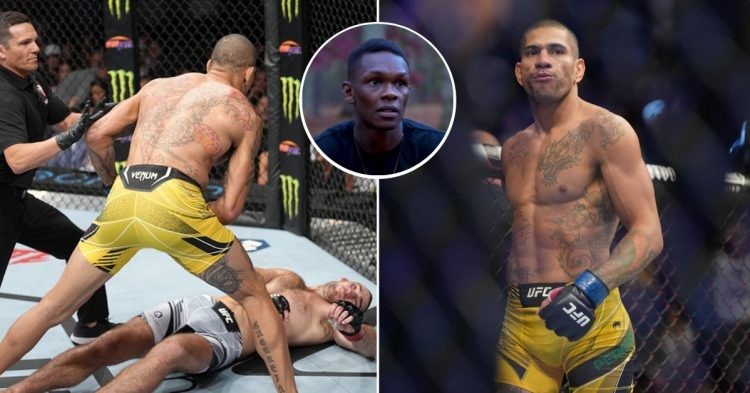 It seems like Israel Adesanya doesn’t rate Alex Pereira’s mixed martial arts career too highly. When asked how he would rate Poatan inside the Octagon, here’s what the Stylebender had to say.

“I don’t know about his MMA, I never watched till he got into the UFC,” Adesanya said. “4 or 5. I think that last one brought it to a five.” He said referring to Pereira‘s first-round KO win over Sean Strickland.

Alex Pereira made his UFC debut just last year in November 2021, and on November 12, he takes on Israel Adesanya for the undisputed UFC Welterweight title. It’s safe to say, Pereira’s incredible kickboxing record and his rivalry with Israel Adesanya have a lot to do with Poatan skipping the line for the UFC gold.

Alex Pereira has only had 7 professional MMA bouts, out of which three have come inside the UFC Octagon. Pereira made his UFC debut against Andreas Michailidis, a fight he won via a flying knee in the second round. Pereira then took on a tough Bruno Silva, going full three rounds for the first time in his MMA career. He picked up a unanimous decision victory to go 2-0.

Pereira’s toughest test inside the UFC Octagon came in the form of Sean Strickland in his third UFC fight at UFC 276. A fight that earned him the title shot and rightfully so. Pereira knocked out Strickland in the very first round, earning him his second Performance of the Night bonus.

On November 12, Pereira will look to create history as he attempts to hand Israel Adesanya his first loss in the 185-pound division.

Has Alex Pereira lost in his MMA career?

Alex Pereira suffered the first loss of his MMA career in his debut fight back in 2015. Quemuel Ottoni submitted Alex Pereira in the third round at Jungle Fight 82. This was even before Pereira had fought Israel Adesanya in the kickboxing ring.

Quemuel Ottoni proved quite a tough challenge for Pereira, who looked incredibly sharp on his feet but failed to catch up with the fast-paced nature of mixed martial arts with Ottoni’s constant attempts at takedowns. Visibly tired, Ottoni absorbed the best shots that Pereira had to throw, with his grit and tenacity proving to be too much for the Brazilian fighter.

With no serious damage in the first few takedowns in the first and second rounds, Ottoni finally hit the homerun when he got Pereira’s back in the third round, catching him with a rear naked choke for the victory. Pereira’s welcome to the world of MMA ended in a disappointing stoppage loss.
Tags: Alex PereiraIsrael AdesanyaUFCUFC 281
Previous Post