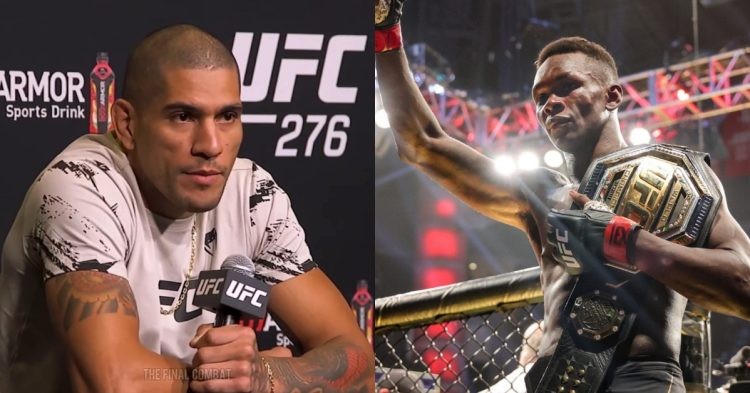 UFC 185lbs champ Israel Adesanya is well on his way to becoming one of the best MMA fighters ever! Although he had a bump in the road against Jan Blachowicz at UFC 259, Izzy is yet to lose a fight via stoppage inside the Octagon. But kickboxing phenom and UFC middleweight fighter Alex Pereira wants to change that!

Alex Pereira was and still is, the only fighter to have knocked Israel Adesanya out. They crossed paths twice in the kickboxing ring previously in 2016 and 2017. The first fight which took place in China, ended with Oliveira getting his hand raised after a unanimous decision victory. But their second fight is the more talked-about one as it saw Alex flatlining Adesanya with a left hook in his home country of Brazil.

Although 5 years have passed since then, it seems like their third fight is a big possibility. Both of them will feature in the upcoming UFC 276. While Stylebender will take on Jared Cannonier at the PPV, Poatan is set to take on Sean Strickland. If both Adesanya and Pereira win their respective fights, they might potentially fight each other yet again, but this time inside the UFC octagon for the middleweight gold.

Although he is yet to beat Alex Oliveira, Israel Adesanya welcomes another bout against the 34-year-old fighters. In a recent interview, Adesanya urged the fans to rewatch the previous bouts and not be distracted by the flashy knockout. Izzy insisted that both of their fights were much closer than people remember and he can not wait to face Alex in the Octagon.

The Kiwi brought up the difference between the gloves in kickboxing and MMA. In kickboxing, the size of the gloves varies between 10 oz, 12 oz, 14 oz and 16 oz. But in MMA, fighters are required to wear 4 oz gloves, which make the punches much more potent. Adesanya stated that he wanted to hit Alex with the small gloves and get his revenge. In response to that, Alex said,

“Well, it actually makes me confused because with those two fights and the knockout actually, he claims to be a pillow. But now we talk about 4 oz gloves. It is deadly weapons but with the big pillows, I already make him leave on a stretcher and gas balloon on him. So imagine what is gonna happen with the 4 oz.”

Alex Pereira seems like a very credible potential opponent for Izzy. Most of the time, fans already know what the result of Israel Adesanya’s fights will be. Hence, it dampens the mood of the build-up to the fight. But this time around, Izzy will be going up against someone who may enter the bout as the favourite.

On top of that, Alex Pereira does not mince words and neither does Adesanya. Hence a clash between two former kickboxing rivals will be a mouth-watering one.