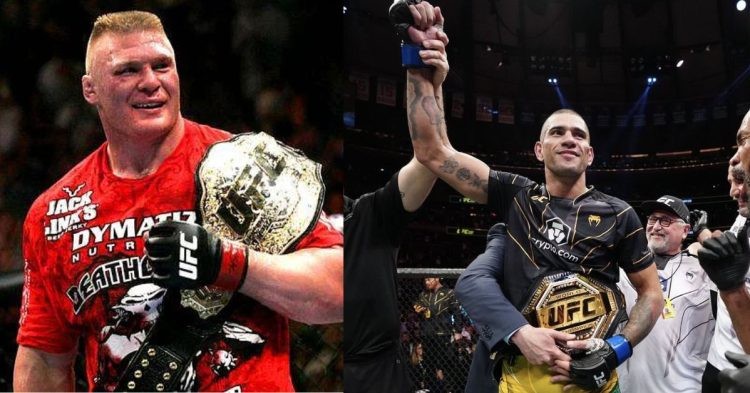 Alex Pereira created history as he stopped Israel Adesanya in the fifth round at UFC 281 to become the new UFC Middleweight Champion of the world. In the process, Pereira joined the likes of Brock Lesnar and Tito Ortiz to win a UFC title in less than 10 outings (after 2000) as a mixed martial artist.

Alex Pereira competed in his eighth mixed martial arts fight and his 4th UFC appearance when he stepped inside the cage against Israel Adesanya on November 12 for the UFC gold in MSG. As for Brock Lesnar, the Beast Incarnate became the UFC Heavyweight Champion of the world in just his fourth MMA fight. The title win against Randy Couture was also Lesnar’s third UFC appearance.

Tito Ortiz made his MMA debut inside the UFC Octagon back at UFC 13 in May 1997. He would beat Wanderlei Silva at UFC 25 to become the UFC’s Light-Heavyweight Champion of the world.

If we date back to before 2000, right around the time when UFC started, there are several UFC fighters who got hold of the UFC gold without much experience inside the cage.

Alex Pereira joins this list of elite fighters to have won the UFC gold without more than 10 fight experiences as a mixed martial artist.