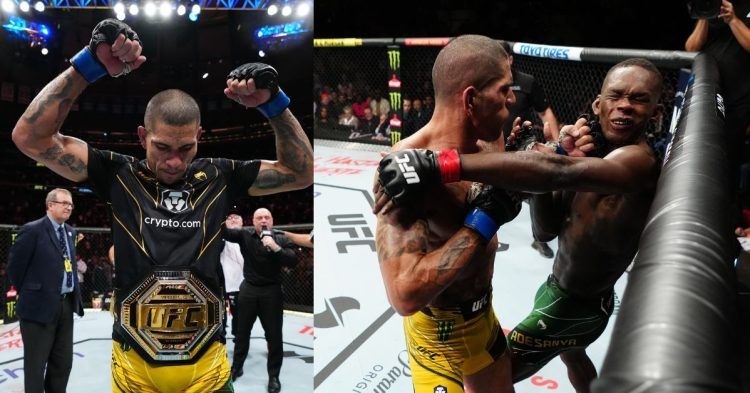 Alex Pereira has taken the MMA world by storm after beating the former middleweight king Israel Adesanya at UFC 281. ‘Poatan’ is one of the most dangerous strikers in the world. After a successful kickboxing stint, he transitioned into MMA and after only a year in the UFC, he has captured the middleweight belt.

Following his UFC 281 win, ‘Poatan’ was been awarded a Brazilian jiu-jitsu brown belt by his coach Plinio Cruz. However, this has been taken in a very negative way by the fans. According to the fight fans, Pereira doesn’t deserve the brown belt as he was outwrestled by Adesanya, who is a purple belt.

Pereira was down by points in his main event fight against Adesanya. However, in the last round, he unleashed a killer combo on Izzy, which stunned ‘The Last Stylebender’, and eventually, the fight was called off.

‘Poatan’ is a killer on his feet but there are a lot of holes in his ground game. Other top contenders like Robert Whittaker, Marvin Vettori, and Paulo Costa are significantly better at grappling than Adesanya. However, Pereira is new to MMA and there are a lot of improvements to be made.

We have seen his lethal striking but we are yet to witness his grappling. In his last fight, he took down Adesanya but was soon outwrestled. If he faces someone like Whittaker, he won’t have any chance in grappling. For this, getting a brown belt seems too soon as per the fight fans.

Alex Pereira gets trolled for getting BJJ brown belt

Soon after Alex Pereira got his BJJ brown belt, fight fans started trolling him in the comments. This is because Pereira was dominated by Israel Adesanya. After all, Adesanya is not even a good grappler.

One fan left a comment: “After showcasing 0 ground skills in the fight with @stylebender!”

After showcasing 0 ground skills in the fight with @stylebender! 😆

Another user said this: “What did he do in that fight to get a brown belt? Closed guard?”

What did he do in that fight to get a brown belt? Closed guard?

Another fan left a comment: “Awarded a belt after getting controlled on the ground by a kickboxer? Lol”

Awarded a belt after getting controlled on the ground by a kickboxer? Lol

One fan predicted that Pereira will get the brown belt next as Adesanya is a purple belt in BJJ. And Pereira is always one step ahead of Izzy. The user said: “Alex Pereira next goal is to get brown belt in BJJ. Just one level above Izzy. #UFC281”

I fuking CALLED IT https://t.co/FhfjX8FOx3

Another fan said this: “Alex: “What belt is Izzy?” Coach: “Purple” Alex: “Gimme a brown belt”

First, because I don’t want to just sound like a hater, let me say that Alex Pereira is a phenomenal fighter with absolutely amazing striking power…But come on…Only if they gave him a brown belt to indicate that his ground game looks like doo-doo. Lol!https://t.co/xYHjJ97a04 pic.twitter.com/5cmLV0WKHX

Soon after Pereira knocked Adesanya out at UFC 281, fight fans began a meme fest saying Pereira will hunt down Adesanya wherever he goes. This is an inside joke referring to Adesanya’s transition into MMA after getting knocked out by ‘Poatan’ in kickboxing.

Now, Pereira has done it again. After the Brazilian has beaten Adesanya, fans are now joking that no matter where Adesanya goes or what sport he takes, Pereira will follow him there. Pereira will face Adesanya for a rematch soon. This time we’ll get to see if Adesanya can finally beat his longtime nemesis or get beaten again.