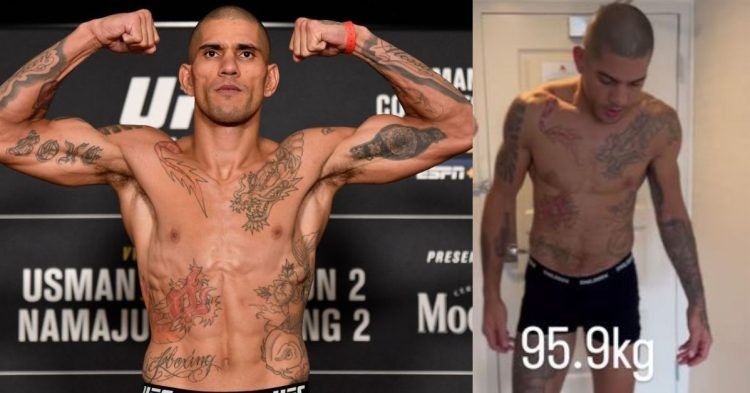 Alex Pereira gained about 27lb after making weight at 184.6lbs ahead of UFC 281 (Credit: UFC, Twitter)

Alex Pereira shocked the world by dethroning Israel Adesanya at UFC 281. The Brazilian stunned Adesanya in the 5th round of the main event fight at MSG and won via TKO. However, some fight fans have wondered if Pereira’s weight advantage helped him immensley win the middleweight belt.

During the official weigh-in ahead of UFC 281, Pereira was suspected to miss weight. He struggled to make weight and waited until the last ten minutes to step on the scales and made weight at 184.6lb, while Adesanya made weight without any issue.

We have ourselves a main event!!

However, after making weight, Pereira piled on almost 27 lbs within 24 hours ahead of his title fight. He later posted a picture on his social media account showing that he weighed 95.9kg (211.4lb), which is around 27lb heavier that his official weight for the main event fight.

During the fight night, Pereira looked huge too. He was towering over Adesanya and given that they both stand at 6’ 4”, Pereira’s enormous size was surprising. ‘Poatan’ definitely had the weight advantage against Izzy and some might say that his massive size played an important role in his UFC 281 victory.

Alex Pereira’s real weight when he is not fighting

Despite fighting in the middleweight division, Alex Pereira normally weighs around like a light heavyweight. Ahead of his trilogy bout against Adesanya at UFC 281, he boasted of weighing 232lbs.

For reference, the heavyweight weight limit is 205lb to 265lb and the light heavyweight is 185lb to 205lb. In his fight against Sean Strickland, Pereira gained about 15kg (33lb) before the fight night, after making weight at 185lbs.

Pereira’s enormous size is also visible when he does not fight. ‘Poatan’ trains at the gym with light heavyweights like Glover Texeira, Dominick Reyes, and Lyoto Machida. In recent pictures, Pereira looked huge when standing next to the light heavyweight contenders.

Apart from the middleweight, the Brazilian also fought in the light heavyweight division when he used to compete in Glory Kickboxing. Pereira also became the first fighter in Glory history to simultaneously hold two belts at the same time.

Pereira is now 3-0 against Adesanya. He beat ‘The Last Stylebender’ twice in kickboxing – the first fight by decision and the second by knockout. Pereira is also the only man to knock out Adesanya. But now Pereira has defeated Adesanya for the third time.

This time in the UFC, and he has broken Adesanya’s undefeated middleweight record and become the UFC middleweight champion. Pereira won via stoppage at UFC 281, but according to Adesanya and some fight fans the fight was called early and the fight fans are hoping for a rematch soon.