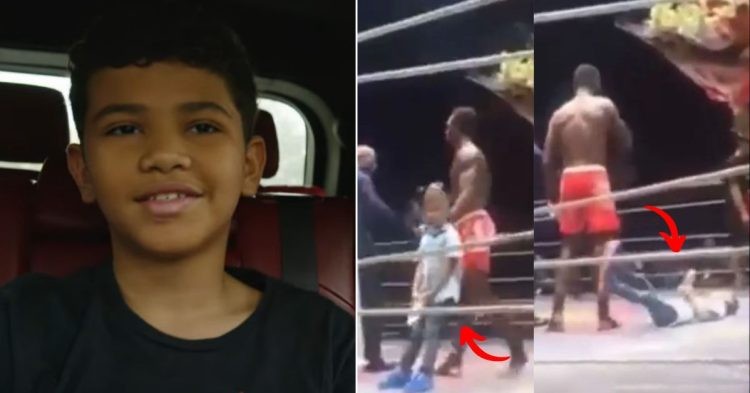 Alex Pereira definitely has the bragging rights heading into UFC 280 despite Israel Adesanya holding the Middleweight gold! With two wins over the Stylebender, Periera has not missed any chance at taking a dig at his rival leading up to the fight.

While UFC is already using the footage from Glory kickboxing where Pereira knocked Adesanya out cold, another video that is doing the rounds on the internet is of Pereira’s son mocking the Stylebender immediately after it. Making an appearance on UFC 281 Embedded, Alessandro Vidal Silva, Alex Pereira’s son reveals his reasons behind the act after all these years.

“I got into the ring with a bottle and was mimicking what my father did to that guy. I hit the plastic bottle on my head and fell to the ground.” Alessandro said.

Earlier, Pereira has already shared how it wasn’t planned and he had already warned the promoters to not let his son inside the ring.

Falei antes para não deixar subir no ringue 😂(meu filho Alessandro após eu nocautear o Adesanya). I told them before not to let him in the ring 😂(my son Alessandro after I knocked Adesanya out). pic.twitter.com/xsa8jaySWR

Alex Pereira will take on Israel Adesanya for the third time albeit inside the UFC Octagon on November 12 inside Madison Square Garden. Taking another jibe at the Middleweight Champion, Pereira’s son Alessandro said while responding to his brother Lohan Vidal Silva who opined how “we are going to watch him (Pereira) beat another guy.”

“Not one more guy, the same guy for the third time.” Quirky Alessandro responded. Israel Adesanya has already shared his thoughts on the incident.

While it’s one thing to say that pressure is on Israel Adesanya, a case can be made that Alex Pereira could also take a huge fall if he loses at UFC 281.

The past two fights between Pereira and Adesanya have been incredibly close, and while Pereira might have been the victor on both occasions, it did not come without a fight from the Stylebender. Particularly the second fight, where Adesanya almost stopped Pereira in the second round.

It’s an exciting match-up between two of the greatest strikers in the world of combat sports. Who will come out victorious at UFC 281? We will find out in less than a week.