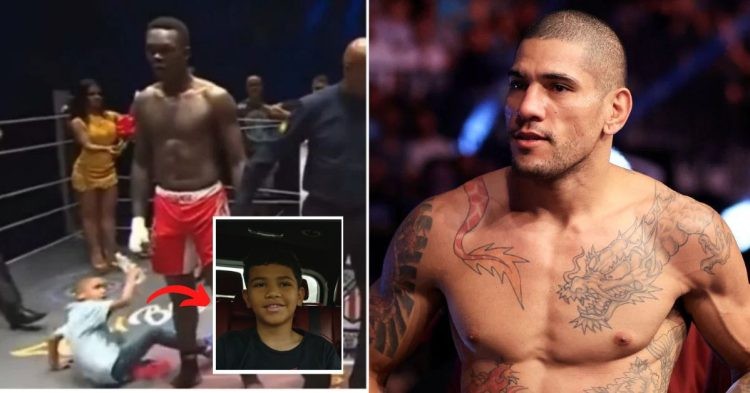 Alex Pereira’s son Alessandro Vidal Silva has become a star in the leadup to UFC 281 and rightfully so! After going viral for mocking Adesanya back in 2017 following Stylebender’s vicious KO loss against Pereira in kickboxing, Alessandro has come out with another subtle jibe at the Stylebender.

Making an appearance on the UFC Embedded Episode 2, Alex Pereira’s sons can be seen having a conversation. As Alessandro’s brother Lohan Vidal Silva shares his excitement, “we are going to watch him beat another guy,” the quirky Allesandro leaves a smile and says, “Not one more guy. The same guy for the third time.”

Alex Pereira’s son mocking Izzy by pretending to be knocked out pic.twitter.com/BjkZB4Ls0d

The viral video of Pereira’s son mocking Israel Adesanya after the KO loss has everyone talking. It’s safe to say, his appearance on UFC Embedded is sure to leave many fans delighted. “I got into the ring with a bottle and was mimicking what my father did to that guy. I hit the plastic bottle on my head and fell to the ground.”

It goes without saying, there’s a lot of bad blood between both the fighters. And while Adesanya might be the Champion, Pereira has the bragging rights!

Who will at UFC 281: Alex Pereira vs Israel Adesanya?

It goes without saying, pressure will be on both fighters. While Adesanya will look to avenge the sole KO loss of his combat sports career after fives years since they last stood face to face with each other, Pereira has a lot riding on his shoulders too, owing to the multiple wins he has over the Stylebender.

For those judging the outcome of this fight by looking at their kickboxing fights, Adesanya has already stated that those fans are “stupid” to think the fight plays out in the same manner. The Stylebender believes his fighting style is more suited for MMA and considers Pereira a “one-dimensional” fighter.

We will get answers to all our questions in less than a week from now when both these stalwarts collide at UFC 281 on November 12 inside Madison Square Garden for the third time, but this time inside the Octagon!