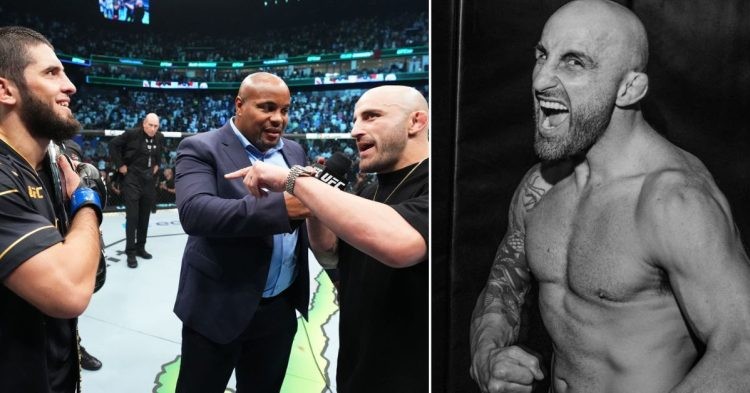 Alexander Volkanovski will move up a weight class as he looks to follow in Conor McGregor‘s footsteps in his attempt to become a two-division champion. UFC has now officially announced Islam Makhachev vs Alexander Volkanovski in what will mark the first title defense of the Dagestani fighter.

The Featherweight Champion is making some serious changes in his diet for his move to the lightweight division. Bulking up would be an understatement as the Australian fighter revealed he is eating almost 4000 calories a day.

It’s no secret now that Alexander Volkanovski used to be a really heavy guy. A heavyweight weighing more than 200 pounds during his college football years, it’s astonishing Volkanovski competes in the UFC’s Featherweight division.

“It’s too much food. Let me tell you that, it’s weird because you’ve got a diet.” “It’s harder than you think, especially when you want it to be reasonably clean. If you see they are going, having big dirty burgers, it would be easy to do 4000 calories.” Volkanovski said.

“But when you are trying to get the proteins in there and the right stuff, especially when you are training as well, have more than that sometimes, it’s pretty crazy.” He further added.

Volkanovski wants to cut to the lightweight limit in the right manner for the fight against Islam Makhachev fight, well aware of the strength that Makhachev brings inside the Octagon. The Australian fighter admits he has never started a training camp this early before a fight, and that says a lot about how seriously he is taking the UFC 284 match-up against Islam Makhachev.

Alexander Volkanovski will look to become a two-division Champion much like Conor McGregor who moved up from the featherweight division and took on Eddie Alvarez back at UFC 205 for the lightweight gold. He is working with Dietician Jordan Sullivan and is making every aspect of strength and conditioning in check.

“I’m bulking, I’m eating a lot of calories at the moment, so it is good. I’m enjoying it, so I’m going to be pretty stacked fight night.”

Volkanovski believes he will be very hard to hold down on the ground, and foresees a striking battle when he faces off against the undefeated Dagestani fighter. Volkanovski wants to check Makhachev’s “supposedly” all-around skills, most particularly his striking which has gained recognition following the Oliveira fight.

Expect a bulked-up and shredded Alexander Volkanovski at UFC 284, which will go down on February 12 inside RAC Arena in Perth, Australia.