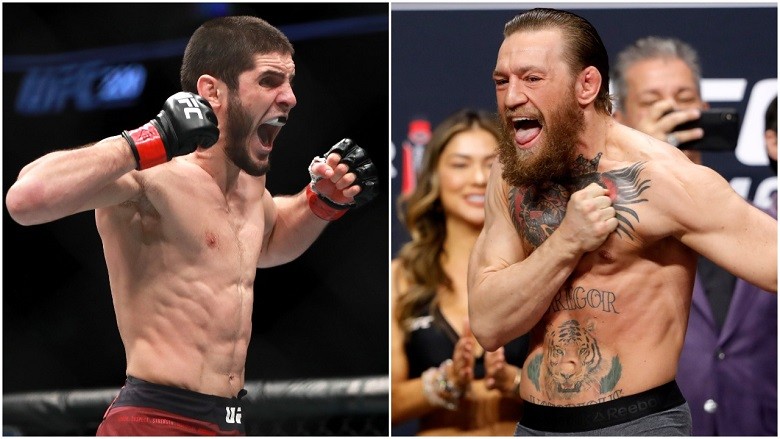 Islam Makhachev will face his biggest challenge in the UFC so far when he takes on Dan Hooker at UFC 267. Dan Hooker quickly stepped in to fight Islam Makhachev, replacing Rafael dos Anjos, who withdrew due to impending knee surgery.

Sharing a Conor McGregor’s post, Abdelaziz wrote: This is who you dreaming about every night @MAKHACHEVMMA you know I know.

This is who you dreaming about every night @MAKHACHEVMMA you know I know ???????? https://t.co/PSTCEh8oEn

Abdelaziz and McGregor have shared a lot of animosity ever since the days of UFC 223 when Conor McGregor and Khabib Nurmagomedov were involved in the infamous bus incident. That is what led to the bitter rivalry between the two, giving birth to their iconic UFC 229 clash.

Since then McGregor and Abdelaziz have been going back and forth at each other several times on social media. After Islam Makhachev had beaten Thiago Moises at UFC Vegas 31, Abdelaziz had also tweeted that he wants to see Makhachev break McGregor’s neck.

Abdelaziz has sparked another speculation of a potential fight between Makhachev and McGregor with his latest tweet. It would be interesting to see if Conor McGregor has something to say for Ali Abdelaziz’s latest shenanigans.

Islam Makhachev recently mocked the former UFC Interim Lightweight Champion Justin Gaethje on Twitter. He said “Hey @Justin_Gaethje you not happy I’m getting next to you in rankings.”  This tweet by Makhachev came in response to Justin Gaethje questioning the Dagestani’s sudden jump into the top 5.

Hey @Justin_Gaethje you not happy I’m getting next to you in rankings? ????

“The Highlight” recently gave an interview to Helen Yee in which he mentioned about how he was surprised to see Makhachev climb in the top 5 rankings with a win over Thiago Moises.

“It would be good to see Islam fight someone that’s ranked higher. It was crazy to see… the dude jump from 15 or 12 to five after beating the No. 14 guy. So yeah, I’m glad to see him fight, you know an actual ranked fighter.” said Justin Gaethje.

Islam Makhachev will be taking on Dan Hooker at UFC 267. Whilst Justin Gaethje will lock heads with Michael Chandler at UFC 268. It might be a possibility in the future that both Makhachev and Gaethje may cross each other’s path in the pursuit for the UFC gold.