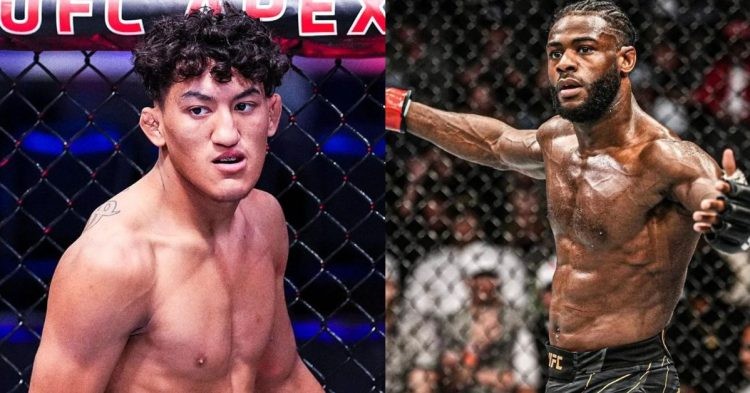 Aljamain Sterling has some advice for Raul Rosas Jr who is making some waves in the MMA community by earning a UFC contract at just 17 years old.

The young Bantamweight dominated his opponent Mando Gutierrez, winning via unanimous decision (30-27) at Dana White’s Contender Series held at the Apex. That performance eventually got him a UFC contract at just 17 becoming the youngest UFC fighter ever.

The current Bantamweight Champion Aljamain Sterling was quick in giving the youngster some important tips.

Congrats to Rosa Jr! I’d slow down on the Chito, Yan, and UFC Champ stuff tho. Might be better/wiser to get OG training partners to guide you and learn from them. But to each his own 🤷🏾‍♂️ Fun scrap! BJJ can be fun when both fighters understand what they’re doing. #DWCS

Sterling further elaborated “At that age, I’d be seeking advice and training from the guys at the top to excel my development. But I’m sure Rosa and his team are smart to have things prepared for him and his future”

It would be interesting to see what does future holds for Raul Rosas Jr. He aspires to become the youngest UFC champion ever. Talking to the media post-fight, he said “You know, I’m just ready to fight every week, every month. I don’t even care, you know. I’m all gas, no brakes, you know. Like I said, I’ll rest when I’m retired. When I’m old, not right now. We’re just getting started. So there’s no reason to take a break, you know. I know it won’t be easy, nothing in this life’s easy. But I will become the youngest UFC champion. I don’t care what it takes. Nobody’s gonna take this away from me.” Currently, Jon Jones holds that record, when he defeated Mauricio Rua to become the Light heavyweight champ at just 23.

Dana White has no doubt that Raul Rosas Jr. is ready for UFC

Talking about this young sensation, UFC’s President Dana White said “I’m very, very impressed with this kid. He’s absolutely special. The amount of fighters that were blowing me up going, ‘Oh my God. This kid is for real. This kid is legit. Impressive.” When asked if Rosas was too young and inexperienced for the UFC, White responded “Not off what I just saw, After what I just saw, this kid is ready to fight in the UFC.”

About the fight, White said “What a war, what a technical fight it was,” White told reporters at the DWCS 55 post-fight press conference. “Both guys pushed themselves as hard as they could. And for a 17-year-old to conduct himself the way he did in this fight, I was blown away by it. Blown away.”