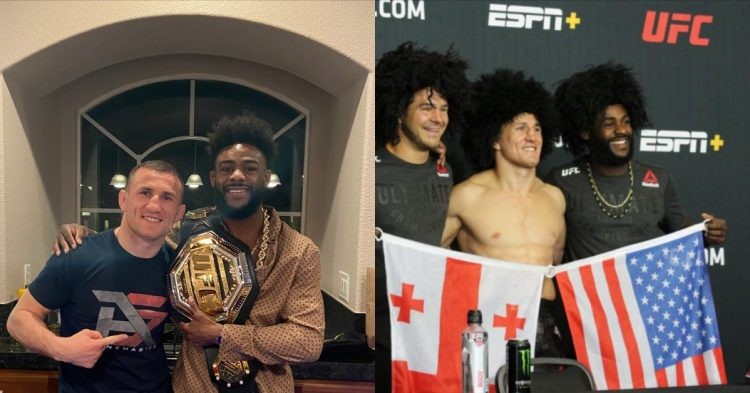 UFC Bantamweight Champion Aljamain Sterling is planning to leave the division! Sterling defended his belt for the first time against Petr Yan at UFC 273 in April. He is already plotting a move to the featherweight division. However, he has a very heartfelt reason for his decision.

Aljamain Sterling is part of the Serra-Longo Fight Team in Long Island. But Aljo is not the only elite 135lbs fighter in the gym. He is team-mates with Merab Dvalishvili who is ranked 6th in the bantamweight division. After losing both of his first two UFC fights, Dvalishvili had a spectacular rebound. He is currently on a 7 fight win streak.

The 31-year-old defeated Marlon Moraes in September of last year. He is almost on the verge of breaking through the top 5 of the division. With a few more wins, Merab will definitely be a serious title contender.

But there is a problem, his best friend Aljo is the current champion. Pointing that out, a fan asked Aljo when he will fight Merab. In reply to that Sterling stated that he’d rather leave the division to let his friend fight for the belt than fight Dvalishvili. He wrote,

After Merab’s next win, I will probably have to move up, to allow him his chance that he earned, to make history for Georgia 🇬🇪 to win a world title. We will figure it out. https://t.co/buDwgCSObs

Aljamain Sterling will relinquish his bantamweight title for Merab Dvalishvili

Such an act to save a friendship is very rare in the sport of Mixed Martial Arts (MMA). The fans are used to best friends turning on each other to prioritise their own interests. Such rivalries have been at the forefront lately as Jorge Masvidal fought Colby Covington in the main event of UFC 272.

This gesture will earn Aljamain Sterling a lot of respect in the community. Former UFC double champ Daniel Cormier did something similar for his friend Cain Velasquez. Following his success in the heavyweight division in Strikeforce, DC moved down to 205lbs to avoid crossing paths with Cain.

.@TJDillashaw who TF have you beaten that is soOoOoo much tougher than the guys I’ve faced? 😂 This is Comedy Central. You should do stand up with @HenryCejudo. He’s your daddy, after he sonned your needled ass💉

But The Funk Master will not give up the belt anytime soon. Although it is not confirmed yet, Sterling and TJ Dillashaw are rumoured to be fighting each other very soon. He also has other options in the division such as Jose Aldo, Dominic Cruz or a super fight against Sean O’Malley in the future. So Aljo has a lot that he would like to accomplish before he leaves the weight class.

Can he succeed at featherweight? The 145lbs is filled with killers such as Max Holloway, Brain Ortega and Yair Rodriguez. On top of that, the champ Alexander Volkanovski is one of the top ‘P4P’ (pound for pound) fighters in the UFC. Hence, it will certainly not be easy to find instant success in the division. But Aljo is an elite grappler, so his chance can not be counted out.