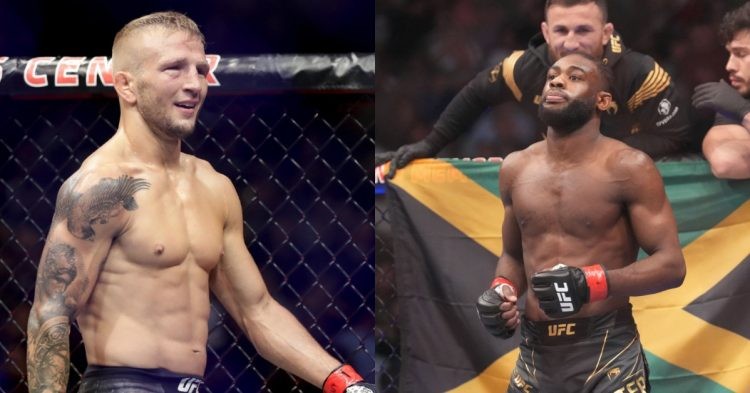 Aljamain Sterling has his next fight lined up as the UFC Bantamweight Champion is set to defend his belt against TJ Dillashaw. Aljo called out the former champ following his win over Petr Yan at UFC 273. Hence there were already rumours of the bout being a lock. But now an official report from MMA Junkie confirms that the fight will indeed take place at UFC 279.

TJ Dillashaw was stripped of his 135lbs belt in 2019 after a failed drug test. After serving a two-year ban, TJ returned against Cory Sandhagen in 2021. After a hard-fought contest, he got the win via split decision. The 35-year-old is currently the 2nd ranked fighter in the division.

The report also suggests that the date of 10th September is tentatively being looked at for the event. But at present, there has not been any official announcement regarding the date or venue for the event. Although the bout between Aljo and TJ will feature a belt, the report does not specify whether it will be the main event or not.

Aljamain Sterling silenced a lot of doubters with his performance over Petr Yan. Yan was considered a huge favourite to beat Sterling at UFC 273. But in a performance of a lifetime, Aljo put on a grappling masterclass and outpointed Yan to retain his belt in April.

TJ Dillashaw on the other hand, had a hard time in the Octagon against Sandhagen. However, that can be attributed to the layoff of 2 years. One can expect TJ to be much more in tune with his body this time around. Hence, the bout promises to be a fascinating duel between the old guard and the new guard.

Dillashaw is clearly the better striker between him and Aljo. Not only does he use punches, but TJ also has a variety of striking offences that will give Sterling a lot of issues. Dillashaw is extremely hard to take down as well. In his 17 UFC fights, he has only been taken down 5 times. TJ boasts a takedown average of 86%.

Hence, the former champ has all the tools in his arsenal to regain his title and dethrone Aljamain Sterling. But Aljo does possess the momentum of a 7 fight win streak and the confidence that comes with it.

Do you think TJ Dillashaw can overcome the odds and hold the UFC Bantamweight Championship once again? Or Aljo will once again shatter all expectations and retain the belt? Let us know your thoughts on the match-up in the comments down below.