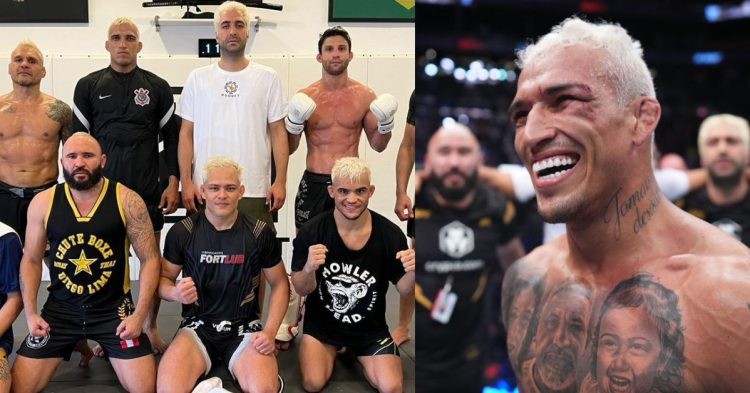 Charles Oliveira has been on an incredible run in the lightweight division since his loss to Paul Felder. After a few losses in his UFC resume, something changed in Charles Oliveira.

After his loss to Felder, Oliveira made sure that he never loses in the octagon again. Oliveira has even admitted that the birth of his daughter affected his mindset. Besides that, Oliveira’s training with Diego Lima has certainly helped him immensely to win the lightweight title.

Do Bronx is certainly very proud of his team as he called it the best team in the world following his title defense against Justin Gaethje. And it’s hard to argue against that notion after the accomplishments of Oliveira in the lightweight division.

Oliveira has the undying support of his teammates going into his fight against Islam Makhachev at UFC 280. They have even dyed their hair platinum to support Oliveira throughout the fight week. And when the former champion was asked why everyone in his team has colored his hair, Charles Oliveira had a fascinating response.

Charles Oliveira makes it clear that he does not force anyone to color their hair. The Brazilian stated: “It’s actually not about not wanting to dye the hair. All of them want to dye their hair. Everybody is on the same vibe.”

Why Does Charles Oliveira color his hair before every UFC fight?

This tradition started not so long ago when Oliveira fought Kevin Lee. Since then the former champion has been following the tradition for his fights. Talking about why he chose to dye his hair platinum, Oliveira stated:

“I was with some friend and out of now, here they started saying “You’re going to dye your hair, you’re going Saiyan style. I started mocking them: “I’m dyeing it blue. Let’s all dye it pink. They were incredulous and I said: “Pink or red”. They said green and I replied yellow. They said that everyone dyes it yellow and then suggested platinum. I agreed and we all dyed it platinum.

Charles Oliveira has an opportunity to become the greatest lightweight of all time with a win over Islam Makhachev. However, Team Khabib will surely have a different plan to ruin the parade of Oliveira at UFC 280.