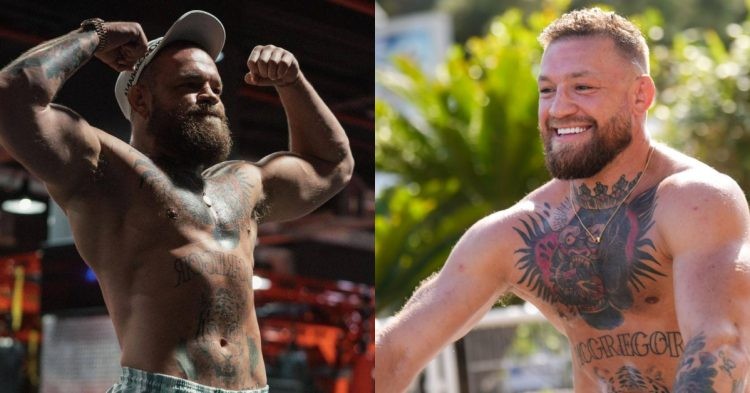 Nicknamed the Highlight, Justin claimed that Conor was on steroids. Gaethje, who is extremely opposed to fighting opponents on steroids, is willing to make an exception for Conor McGregor.

Gaethje stated that The Notorious One was on steroids to recover from the leg injury he suffered against Dustin Poirier at UFC 264. If that is the case, then UFC should allow him to use PEDs and fight McGregor, as per Justin.

Although some fans thought Gaethje’s comments were made in jest, Daniel Cormier begs to disagree. DC, who recently made his WWE debut as a referee, thinks Justin may have some behind-the-scenes information regarding the topic. In a recent video on his YouTube channel, Cormier wondered if anyone from Gaethje’s team is looking into the matter or not.

“Justin went so far as to imply that Conor McGregor — or straight up say, honestly — that Conor McGregor’s off doing some steroids. That is a pretty bold statement… For Gaethje to say that so confidently tells me that either him or his team is kind of looking into it.” (h/t via MMA Fighting)

DC’s assumption of Gaethje’s team investigating Conor’s drug testing history is interesting. Justin is managed by Ali Abdelaziz, who is a sworn enemy of Conor McGregor. The Dublin native has previously hinted towards Ali being a terrorist. So it will not be surprising to learn if Ali was the man behind Gaethje’s comments. However, it is just pure speculation.

Conor McGregor has looked extremely buffed in recent pictures. So the accusations of him being on steroids are natural, especially when he has not been tested by USADA even once in this calendar year. However, DC thinks Conor’s change in shape is because of his relatively short height.

USADA clarifies its stance on the Conor McGregor issue

Reports suggested that Conor McGregor has been excluded from the USADA testing pool. The very first UFC double champ has not been tested in 2022. As per the UFC drug testing policies, a fighter is exempt from drug testing only when they have either given the written notice of their retirement to the promotion, or they are no longer in contract with the UFC.

“Once UFC athletes are enrolled in the testing program, they are subject to testing – even when not competing – unless they notify the UFC of their retirement, their contract is terminated, or they are otherwise removed from the program. In the event of an athlete’s return to the UFC, they are required to remain in the USADA testing pool for six months before they are permitted to compete,” said the statement.

“Similar to World Anti-Doping Agency rules, the UFC may grant an exemption to the six-month written notice rule in exceptional circumstances or where the strict application of that rule would be manifestly unfair to the athlete, but in both cases under the UFC rules, the athlete must provide at least two negative samples before returning to competition. We do not comment on the testing pool status of any particular athlete.” (h/t via MMA Fighting)

Conor’s manager previously stated that the Dublin native is set to fight early next year. But then, McGregor himself went on to decline a massive $100 million boxing rematch against Floyd Mayweather. So the situation seems pretty muddy regarding Conor’s fighting future. At present, McGregor is filming his debut Hollywood movie ‘Road House.’

What do you make of the whole situation? Do you agree with Daniel Cormier’s notion that Justin Gaethje has any inside information regarding Conor McGregor and his drug testing history? Let us know in the comments.