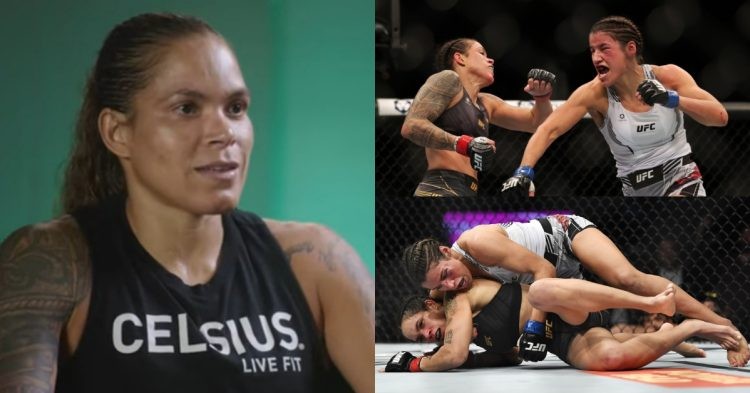 Amanda Nunes has finally revealed what went wrong in her first fight against Julianna Pena at UFC 269. In December last year, she lost her UFC Women’s Bantamweight Championship to Pena after getting submitted in the second round. It came as a shock to the fans and the pundits as she was the heavy favourite to win against Julianna.

Although the bout went as everyone expected it to go in the first round, the momentum shifted around the 3-minute mark of the second round. Amanda seemed exhausted as the fight went on and she eventually ran out of gas as Julianna started to string together a flurry of significant strikes. Sensing Amanda’s exhaustion, Julianna took her down and snuck in a rear-nake choke to end Nunes’ reign.

Recently, The Lioness sat down with ESPN journalist Marc Raimondi to discuss her performance against the current champ last year. Nunes stated that she was limited in the Octagon. The 34-year-old said she tried her best to force herself to win against Pena, but the odds were stacked against her.

“I like have my both knees like pretty bad. I sprained that I no be able to recovery. I was in and out the doctor, doing like a lot of repair to see if I’d be able to at least get a good, solid camp and I wasn’t.”

“But I was doing whatever is possible to move forward in the camp. Using only my arms like do things on the upper body to I can like really be able to step in the cage. So convinced myself that I was good. So I pay you know. It’s a mistake that sometimes we make it.”

Amanda Nunes will be desperate to win back her title at UFC 277. Nunes, who is considered by many MMA fans to be the best active female fighter, will definitely be wounded by the loss to Julianna Pena at UFC 269. She is the better fighter both on paper and in terms of skills. Hence, Nunes will try her best to recapture the 135lbs title.

She has also taken measures to ensure that the result is different this time around. Nunes left American Top Team (ATT) following the loss. She wanted a completely new team around her to help her prepare for the rematch. Amanda did not feel that ATT was suitable for her anymore. Hence, training with the new team will be a big plus point for her.

Nunes was injured ahead of the first bout which compromised her cardio for the fight. It explains why she did not look herself in the Octagon last time. But the Brazilian is going into the rematch rejuvenated and without any visible injuries. Hence she will want to do justice to her GOAT status and regain the UFC championship.