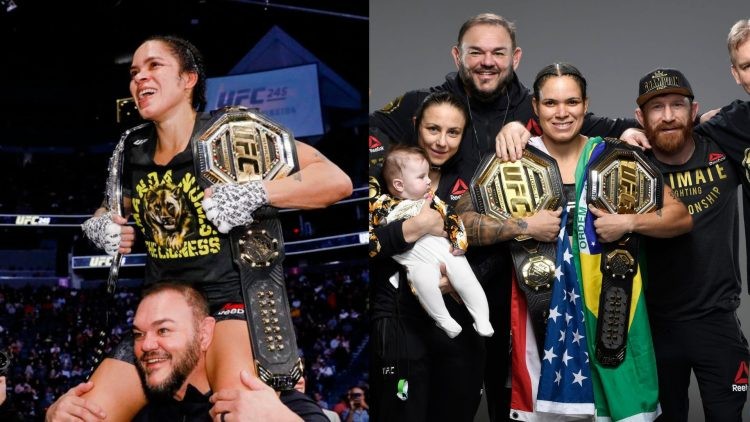 Amanda Nunes lost her UFC bantamweight title to Julianna Pena at UFC 269. As she prepares to enter the octagon to regain her title at UFC 277, fans are curious to know whether she has addressed all the flaws from the first fight.

Amanda Nunes has made some massive changes after the loss to Julianna Pena. She left American Top team and her long time head coach Conan Silveira and built her own gym.

Nunes went back to coach Roger Krahl to prepare for the fight at UFC 277. After this move from Nunes, fans suspected that there are a lot of issues between ATT and Nunes following the loss. In a recent interview with Daniel Cormier, Amanda Nunes addresses the speculations and revealed why she is not happy with her former coach Conan Silveira.

Nunes had to withdraw from scheduled fight against Pena once due to COVID-19. And when she accepeted the fight for UFC 269 she was still recovering from COVID-19.

Why Amanda Nunes was not happy with her head coach?

Besides that, the former bantamweight champion was struggling with injuries, which made things even worse for her. And Nunes does not like the fact that her former head coach did not try to convince her to withdraw from the fight again.

“Right after I turned the first one down because I had COVID I was still coughing DC during the next camp. I was like keep my lungs trying to see how far I can go and cough at the same time. And it was a huge mistake. I still don’t know why I wanted to fight so badly. I was even able to convince my coach.” Nunes said.

Talking about her relationship with Conan and why he could have stopped her from getting into the octagon without feeling 100%, Nunes stated:

“Honestly, I don’t want to put my loss on my coach. I take all the responsibility for that. But he was my head coach for so long. He was somebody that would be able to stop me from that. Nina would not be able to do that to me. She tried though.”

This turned out to be the driving force to start her own gym and hire coaches who would only focus on her game. Amanda Nunes admitted that she did not like PFL champion, Kayla Harrison training at American Top Team.

She explained that Kayla was a potential future opponent and she was trash talking her on social media. Nunes also made it clear that she did not want Kayla Harrison to train at ATT.

What are your thoughts on Nunes changing gym for the rematch against Julianna Pena?