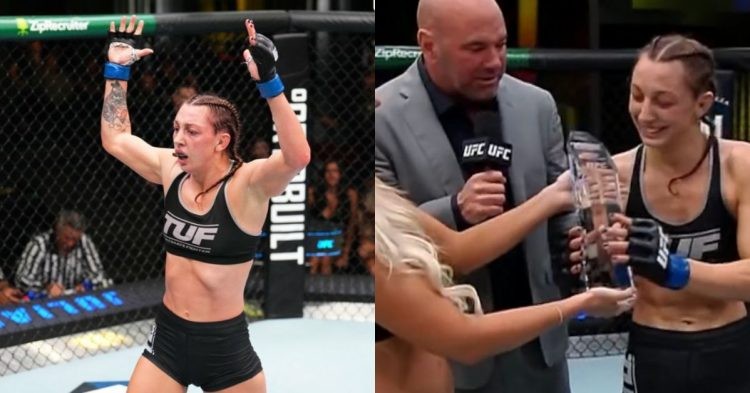 Brogan Walker squared off against Juliana Miller in a three-round women’s flyweight bout that was scheduled on the main card of UFC Fight Night: Santos vs Hill. There was a big prize at stake for both the fighters as the winner would become the Ultimate Fighter flyweight champion.

The Bear who was picked second by Amanda Nunes in her team earned this opportunity by claiming two impressive unanimous decision wins. On the other hand, Miller who was coached by Pena picked up a brilliant submission win in her last fight.

Leading into this fight, there was a lot of animosity between the two flyweights and it is needless to say that fight fans were highly excited to watch this finale. Despite having a height disadvantage, Walker was the favourite to win this fight due to her opponent’s lack of experience.

However, Killer Miller proved all her doubters wrong and dominated The Bear on the ground and won the fight via stoppage in the third round.

After a few spicy exchanges on the standup between Walker and Miller in the first round, the Bear attempted a clinch. It proved costly for her as Juliana Miller got away from the clinch and landed a takedown. Thereafter it was one-way traffic as Killer controlled Brogan for over three minutes in the first round.

The same thing happened in the second round as Juliana Miller countered the clinch and landed a takedown. Thereafter she got into a great position and almost submitted Walker via rear naked choke. However, The Bear managed to break away from the choke. In the final minute, Miller landed a takedown and inflicted a lot of damage from the top position.

Juliana Miller carried the same momentum going in the third round and landed a barrage of ground and pound shots after taking her down for the fourth time in the fight. The referee quickly intervened and stopped the fight and Killer won the Ultimate Fighter trophy.

With this win, not only did Miller make a big statement but has also earned a UFC contract. It would be interesting to see how she performs in the stacked 125-pound division in the UFC.