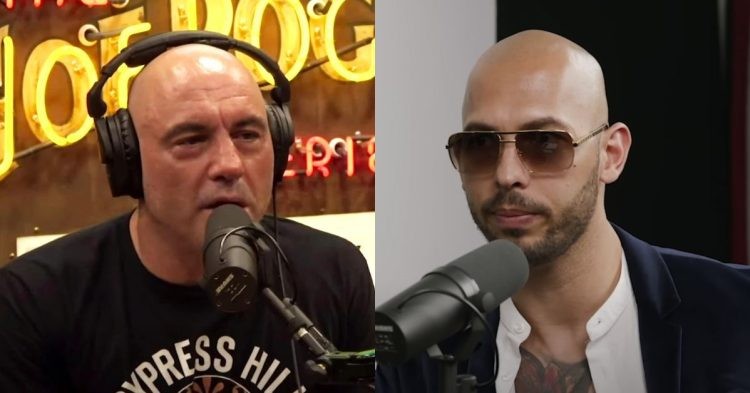 Andrew Tate reveals that he would only travel to the United States to meet Joe Rogan. (Credits: YouTube)

UFC commentator, host, and podcaster Joe Rogan is renowned for his intellect and personality. As such, it is no surprise that he attracts fans from all over the world to tune in and listen to what he has to say. Thus, it appears that Rogan has also found an admirer in Andrew Tate.

Controversial social media star and former kickboxing world champion Andrew Tate has seen a rise to fame like no other. Considered an icon and a teacher by some, he is also considered ‘sexist’ or a ‘misogynist’ by others. As such, a podcast between the two would have made for an interesting watch.

Previously, Tate also spoke about the possibility of a potential link-up between the two. “It’s probably the only thing I would bother traveling to America for.” Further, Tate also revealed that there were ongoing conversations between the two prior to his de-platforming. As such, Tate insists that they would work something out eventually.

For the most part, fans were very excited at the prospect of a Rogan x Tate podcast. According to some, a potential collaboration between these two outspoken personalities would ‘break the internet’. As much as fans and everybody want for it to happen, current circumstances mean that a potential podcast will take some time.

As it stands, Andrew is currently in detention along with his brother and two other accomplices. On December 29, Tate was arrested on the grounds of human trafficking, r*pe, and organized crime. As such, they are being held for 30 days by the Directorate for Investigating Organized Crime and Terrorism for now.

Speaking about Tate’s arrest, Joe Rogan had a few words to say. In episode #1920 of ‘The Joe Rogan Experience’ with Dave Portnoy, Rogan admits to watching Tate, particularly, his interview with Patrick-Bet David. According to Rogan, Tate is a very ‘intelligent and calculated guy’ and has some very strong beliefs and opinions.

Whilst talking about the accusations against Tate, Rogan seemingly defends the former kickboxer stating that upon his release, Tate should consider leaving the country as soon as possible. Moreover, Rogan also believes that people should not root for Tate’s demise, especially before he’s proven guilty.

Although Rogan could face backlash for bringing someone like Tate on his show, everything is purely tentative as investigations continue. Additionally, if investigations do not go as planned, Tate will be detained for 180 days. If found guilty, Tate is set to be imprisoned for 15-20 years.

However, if the charges against Tate are dropped, an episode with Joe Rogan where he reveals all will definitely catch the attention of people worldwide. Currently, there is no word on any other developments, except the fact that Tate’s appeal for bail has been rejected.

Upon his release, if it does happen, do you see the ‘Top G’ coming on Joe Rogan’s podcast? Do you think that the duo would get along? How do you think the episode would go? Leave your thoughts in the comments below.