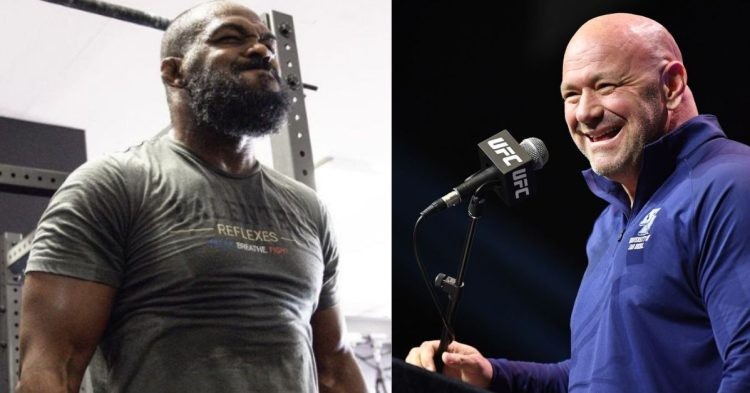 It looks like we will have to wait a little more before we can see the former light-heavyweight champion Jon Jones back inside the UFC Octagon. Earlier, there were rumors that Jones could return to the cage later this year in December, however, that won’t be the case.

Jon Jones was targeting UFC 282 for his UFC return, earlier also confirmed by multiple sources. The only question was whether it would be Francis Ngannou or Stipe Miocic. While Ngannou is still recovering from the knee injury he suffered in preparation for his last bout against Ciryl Gane, Stipe Miocic is yet to step inside the UFC Octagon following his KO loss against the Predator back at UFC 260.

Jones recently confirmed that he is preparing for Stipe Miocic for his UFC return in December. However, in a recent press release by the UFC, UFC 282 already seems to have the main event in place.

Will Jon Jones return in December at UFC 282?

I’m preparing to fight Stipe December 10 in Las Vegas. Not really sure what’s going on between Stipe and the UFC but I’m ready to compete! I’m going to control what I can and stay in shape. https://t.co/3Ouu9Xk8Ns

UFC 282 will headline Jiri Prochazka vs Glover Teixeira in the main event for the UFC’s light-heavyweight championship, seemingly confirming Jon Jones’ heavyweight debut is further delayed. More fights on the UFC 282 card include the return of Darren Till, who will take on former kickboxing champion Dricus Du Plessis.

Rising contender Paddy Pimblett will also make his UFC return to take on Jared Gordon. Fans will also get to see Robbie Lawler, who will step inside the cage to take on Santiago Ponzinibbio.

Are we to assume Jon Jones could take on Francis Ngannou considering he won’t be returning at UFC 280? Or is Stipe Miocic vs Jon Jones the fight to make? Do let us know in the comments section.