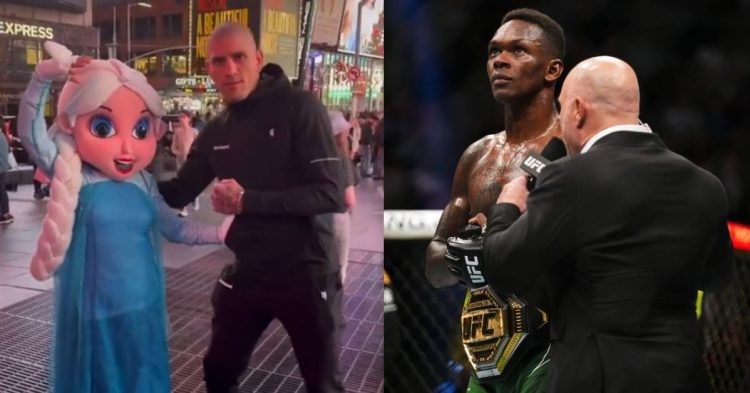 In an interview, UFC Middleweight Champion Israel Adesanya has shed some light on his unorthodox training techniques which were recently mocked by his rival and opponent Alex Pereira who’s the former GLORY World Kickboxing champion in two different weight classes.

Adesanya is known for some of his really unorthodox training techniques, and the one being talked about here is the one in which he stands in front of a wall. Then he tries to dodge tennis balls which are being thrown by him through his head movement. Adesanya quoted in an interview:

“Anderson Silva made that really famous, are you dissing Anderson Silva as well saying his training techniques are stupid? I don’t know, the hoverboard thing was stupid, I was like…it wasn’t even a diss at me, I was like cool story bro”

The Champion explained how this particular technique was invented by the MMA legend and former UFC Middleweight champion Anderson Silva. Silva reigned the Middleweight division for almost a decade. Silva was recently seen in the boxing ring against Jake Paul. Though he could not get the judges nod and lost via unanimous decision to the YouTube star.

Pereira has broken his usual character to come out as something of a troll, not leaving any chance to mock Adesanya on his unorthodox habits. The contender recently mocked Adesanya by recording himself doing mitt work while standing on a hoverboard, showing off his superior balance, and even tweeted a picture of himself beside ‘Elsa’ from the movie ‘Frozen’ in reference to a line Adesanya uses quite frequently, “I’ll leave you frozen like Elsa.”

The rivalry is progressing with time, getting more and more intense by the minute. It’s all adding fuel to the fire that’s burning amongst the fighters. They also have a comprehensive history and the fans are all here for it. They’ve taken a liking to Pereira’s trolling as it’s usually Adesanya who does it. Some fans reacted through twitter:

Alex was placed on this earth for one special purpose – trolling Izzy.

The pair is set to clash this weekend, and as the animosity and the rivalry gets even more heated between the two fighters, the fans get to enjoy a more competitive fight and an exciting build-up to it.