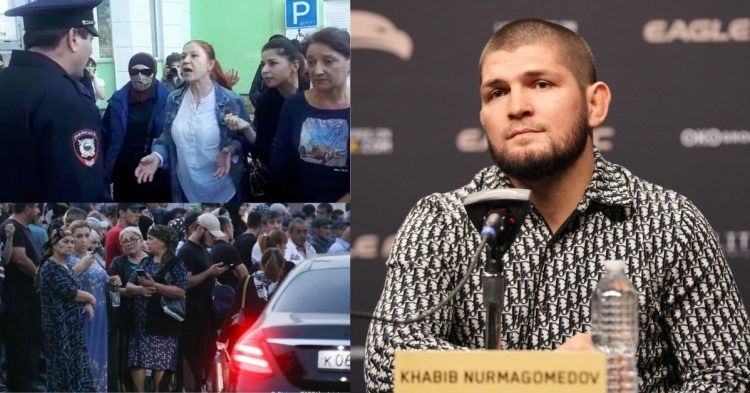 Khabib Nurmagomedov is currently training Islam Makhachev for his upcoming title fight against Charles Oliveira that will take place in Abu Dhabi in December at the UFC 280 PPV. They are currently in training camp which is taking place in the UAE and are preparing for the matchup.

However, The Eagle is under a lot of scrutiny after he showed a lack of involvement in his hometown Dagestan’s protest against the Russian government’s actions of war with Ukraine.

To make matters worse, Khabib and Islam playing football with Sheikhs caught the attention of fans online and consequently, the former UFC champion had to bear a major brunt of criticism from his hometown fans.

Khabib’s IG is filled w/ an endless stream of Dagestani fans appealing to him to support their protests.

“Khabib, all these years you have been supported by the people of Dagestan….at least once stand up for the people. Be like Muhammad Ali.”

And yet, Khabib remains silent.. pic.twitter.com/CcqYinnbXW

“The heroes of Dagestan are not UFC fighters in shorts but ordinary women in headscarves,” commented one of the users on Twitter.

The ongoing war situation of Russia and Ukraine has affected thousands of people and subsequently, Dagestani women have come forward and started the anti-draft protests against the government.

Thereafter several fans from Russia were pleading with Khabib to offer his support to the protest as he is unarguably one of the biggest names in the country. But The Eagle has yet not responded or shared his thoughts on the war.

Does Khabib Nurmagomedov have any ties with Ramzan Kadyrov?

Khabib’s silence on the protests has raised several questions from fans as everyone were expecting him to support the protests of people from his hometown. Several people online have alleged that Khabib Nurmagomedov is not speaking because of his relationship with Ramzan Kadyrov.

Ramzan Kadyrov is a Russian politician who is the head of Chechen Republic and is currently responsible for drafting people into the war. Despite the claims of fans, Khabib does not have any direct contact or relation with Ramzan.

Khabib’s manager maintains a working relationship with Ramzan Kadyrov, who is forcibly conscripting Chechens into the war. He manages Kadyrov’s fighters in the UFC.

I would take anything that hypocrite says with a mountain of salt. https://t.co/4obUiVibRu

However, as per the above mentioned report from Zidan, The Eagle’s manager maintains a good relationship with Ramzan Kadyrov which could be a major reason why Khabib has not shared his opinion on the war or has supported the anti-draft protests.

Another reason could be that Khabib does not wishes to drag himself in this mess and severe his relation with influential people in Russia.