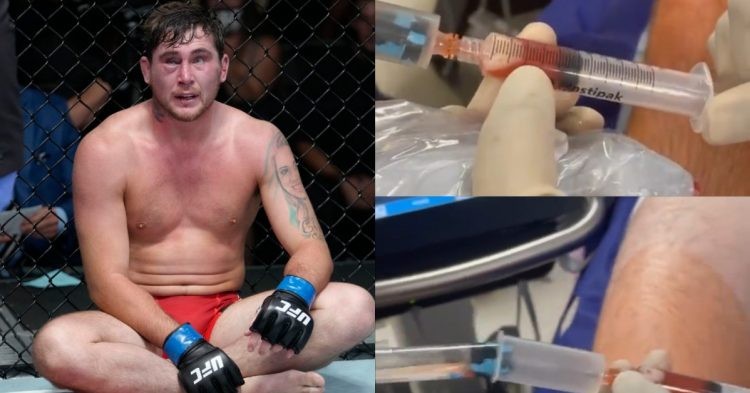 Darren Till reveals a glimpse of his injury. (Images via Twitter)

As reported earlier, Darren Till will no longer be a part of the upcoming UFC Fight Night London. He was supposed to fight Jack Hermansson in the co-main event of the night. After Till’s withdrawal, Chris Curtis will fill the void as he fights Hermansson on very short notice.

Although the particulars of the injury were under wraps initially, now it looks like Till has suffered a knee injury. ‘The Gorilla’ took to Twitter and shared a clip of him getting treated for his wounds. In the caption, Till expressed his gratitude for the good wishes and promised to make a strong return.

Be back stronger 👍🏻 thanks for messages of support everyone… pic.twitter.com/Ms9kZW72ZR

Darren is no stranger to injuries. But this particular injury also caused him the bout against Derek Brunson in September of last year. He lost the bout to Brunson via rear-naked choke in the third round. Darren looked out of sorts from the beginning of the contest. During the fight, Till did not have the same mobility in the Octagon that he usually does.

After the loss, Till revealed to his fellow countryman and the former UFC Middleweight Champion Michael Bisping that he had a major ACL injury coming into the contest. According to Bisping, Darren apparently suffered the injury 10 weeks before the fight, but went through with the bout anyway.

Even in the fight against Whittaker in 2020, Darren Till suffered some serious blows to his knees. According to a report, the Brit tore his MCL. Hence, his knees have been through a lot over the years. Although he will miss out on an opportunity to fight infront of his home crowd, Till will finally get the attention that he needs.

When will Darren Till fight next?

At present, it is unclear if he will go under the knife or not. However, if Darren Till does get the operation to repair his knee injuries, he will not be back inside the Octagon for a while. The 29-year-old is ranked 9th in the middleweight division. He may get bumped down a few steps due to inactivity. A return in 2022 seems like it is out of the realm of possibility completely at the moment.

Hence, a return in 2023 looks like a realistic probability. However, he will not be able to fight someone who is ranked in the top 5 of the division. By the time of his return, the landscape of the 185lbs division may look completely different.

The current champ Israel Adesanya is a big admirer of Darren Till. The Last Stylebender has previously stated that he would be open to fighting Till in the future. With the champ rapidly running out of opponents, Darren Till may get a title with 2-3 wins upon his return.