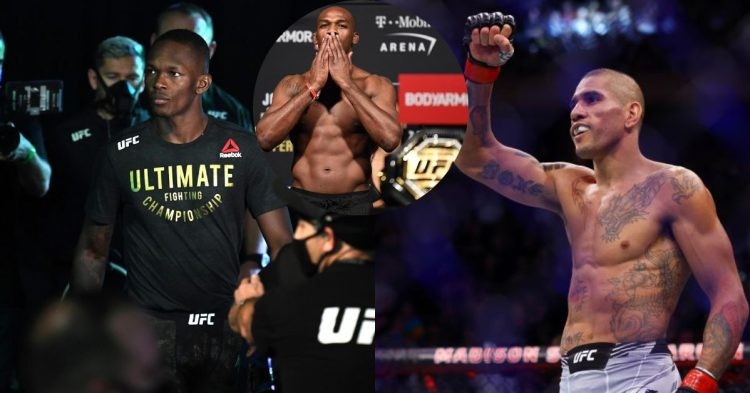 As per the report, Pereira is currently at 226.2 pounds with 9.8 percent body fat. In his recent Instagram post, Alex was seen towering over Dominick Reyes, a two-time light heavyweight title challenger in a picture that quickly went viral.

Pereira’s work ethics and training clip have drawn the attention of many people including the former light heavyweight champ Jon Jones, who also happens to be a long-time rival of Izzy. Jon has given Pereira some pieces of advice during his preparation for the title fight. Jones wrote:

“Be careful not to show Izzy too much champ, I honestly don’t think it will matter though.”

The Brazilian has less than three months to shed his remaining weight to appear for the weigh-in. Although it seems a huge task for the GLORY champ, some people have concluded that it might be a mind game to faze ‘The Last Stylebender’.

Alex is hoping to hand Adesanya another loss, after knocking him out in the kickboxing ring in 2017, his second win over the UFC champ. The Brazilian has taken the MMA world by storm with his banger debut and won all three of his octagon bouts, most recently stopping Sean Strickland via knockout at UFC 276.

Jon Jones and His Rivalry With Israel Adesanya

Jon Jones and Israel Adesanya had a rivalry going on for quite some time now. They took shots at each other on social media and through interviews even though they are one weight class apart. Since Jones announced his move to heavyweight and began bulking, the possibility of a potential super fight circulated throughout the MMA world.

‘The Last Stylebender’ has always focused on fighting Jones at some point in his career. About two years ago, Adesanya stated in a media scrum that he’d go up to heavyweight to chase Jones if it came to it.

However, Jones has confirmed to make a return to the Octagon very soon. UFC president Dana White has mentioned both heavyweight champion Francis Ngannou and former champion Stipe Miocic as potential opponents for Jones.

While Adesanya has an opponent for his next bout in Alex Pereira, Jones is focused more on a heavyweight. But Jon’s coach stated that he’d jump at middleweight if he gets the opportunity to fight Israel Adesanya later.