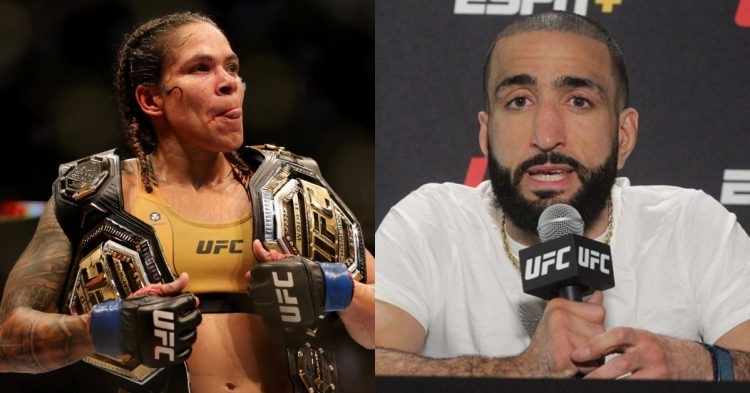 Amanda Nunes took back her UFC Women’s Bantamweight title against Julianna Pena at UFC 277. Although Nunes was a heavy favourite to win the rematch, no one could have expected Nunes to show the kind of dominance that she did. However, Belal Muhammad has a contrary opinion. Muhammad thinks she initiated wrestling to avoid Pena’s power hitting.

Following the fight, Nunes said that she dragged the fight out on purpose to show the fans that the result of their first fight was nothing but a fluke. Amanda scored a record 3 knockdowns in the second round of the fight. But she did not follow up with any of the knockdowns and seemed adamant to keep the fight on the feet. Although Nunes insisted that she meant to do that, Muhammad does not buy it.

The Bully recently put up a video on his Instagram where he recapped all the fights on the recently concluded PPV. He started with the main event and commented on Nunes’ assessment of the contest. Although he was respectful of The Lioness, Belal was not a fan of what Nunes had to say after the fight.

“Amanda, I felt like, is getting too cocky. She’s getting too arrogant saying, ‘I could have finished her in the first round if I wanted to, but I wanted to go five rounds so I could show her who’s better,’ blah, blah, blah. Get out of here with that. You couldn’t finish her.”

There was no doubt about Nunes’ dominance in the fight. The 50-43 scorecard says it all. But, Julianna’s performance did nothing to hurt her stock. She almost secured a few submissions throughout the proceedings of the fight. The 32-year-old also displayed a good amount of power which left its mark on Nunes’ body. Muhammad pointed that out as well during the video.

“I think Amanda started taking her down in the third, fourth and fifth round because she didn’t want to get caught again on the feet. She knows that Julianna punches hard, her eye was very swollen, she was on crutches leaving. So, she was definitely in a fight. It wasn’t a dominating fight like a lot of people are making it out to be.” (h/t via MMA Junkie)

It is not a surprise that Muhammad is defending Julianna. They are teammates and they train together at Valle Flow Striking. So it is natural for him to speak up and back his friend.

It will not be controversial to say that Julianna Pena has no quit in her. Much like Belal Muhammad said in his video, any other fighter possibly would have quit if they were knocked down 3 times. But Pena held on and survived a 25-minute assault against Amanda Nunes. After the contest, UFC President Dana White stated that Pena will require plastic surgery.

But ‘The Venezuelan Vixen‘ made it clear that she will not need to go under the knife. She then proceeded to call out Amanda for the trilogy. However, she may not get the bout right away because of her injury. Both her and Nunes were very banged up after the bout. So both will require a significant amount of time off to recover from the injuries.

What do you think of a trilogy fight between Amanda Nunes and Julianna Pena? Do you think Pena deserves another go at Nunes following a performance like that? Or do you think it is a perfect set-up for the third fight between the two? Let us know in the comments down below.