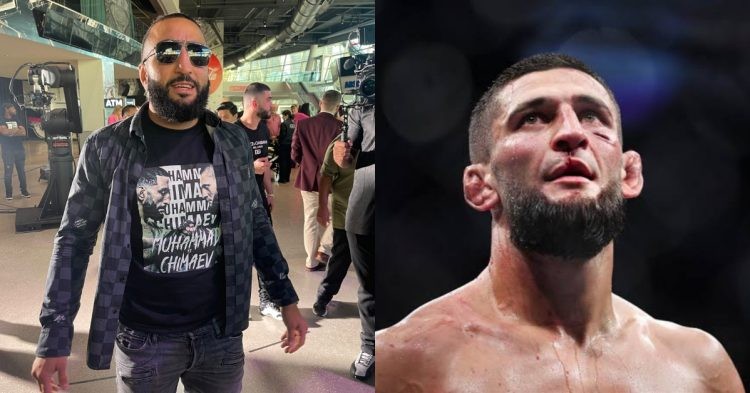 It looks like Belal Muhammad and Khamzat Chimaev are heading in different ways after all. After months of back and forth between the two, Belal has accepted a fight against Sean Brady. Khamzat on the other hand is yet to find an opponent for his next fight.

Ahead of his fight against Gilbert Burns at UFC 273, UFC President Dana White wanted to put Chimaev up against Colby Covington. However, Covington showed no interest in the fight.

When no other top-ranked fighter at 170lbs wanted anything to do with Khamzat, Belal Muhammad put his name forward to fight ‘The Borz.’ For a moment, it even seemed as if bout may happen.

In June, they traded a lot of shots and counter shots on Twitter. At one point, the 28-year-old tweeted that he would fight Nate Diaz in August and Belal Muhammad in October. But, things have gotten quiet since then and Belal seems to have moved on with his career. However, The Bully fired one last jab at Chimaev.

The 34-year-old was so invested in the fight that he even made T-Shirts that had an image of him and Chimaev facing off. Even Khamzat seemed to like it as he posted the photo on his social media platform.

A fan brought it up on Twitter and Muhammad jokingly stated that printing all those T-Shirts was a waste of money.

Although the bout may not be imminent, it remains a possible big fight for the future. Both Belal and Khamzat are taking rapid strides to the belt. Hence, their paths will definitely cross if both of them keep winning.

According to a report from ESPN journalist Brett Okamoto, Belal Muhammad will fight Sean Brady at UFC 281. The event is set to take place in UAE. Reports suggested previously that Islam Makhachev will also be on the card, taking on Charles Oliveira in the main event for the vacant lightweight belt.

Since losing to Geoff Neal in 2019, Belal has been on an 8-fight unbeaten streak. His last two wins were against Vicente Luque and former welterweight title challenger Stephen ‘Wonderboy’ Thompson. Muhammad is currently ranked 5th in the division.

Big business here at welterweight. No. 5 vs. No. 9 in the official rankings. Belal Muhammad (@bullyb170) vs. Sean Brady (@seanbradymma) is verbally agreed for Oct. 22 in Abu Dhabi, per sources. pic.twitter.com/z2DodT19HS

His opponent for UFC 281, Sean Brady is currently ranked 9th in the division. The unbeaten prospect is coming off a win against Michael Chiesa in November of last year. He is touted as one of the better grapplers in the UFC welterweight division. Hence, the bout against Muhammad will be the perfect challenge to put his skills to the test.

What do you think about Sean Brady fighting Belal Muhammad next? Do you think Brady can get the job done against Belal? Or will Belal prove to be too much, too soon for Sean? Let us know in the comments down below.