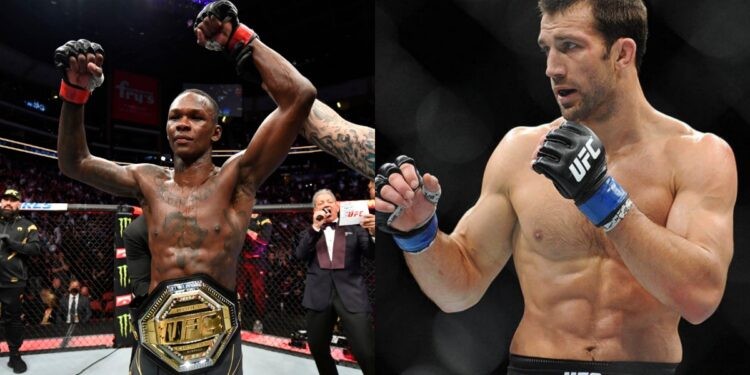 Luke Rockhold desperately wants to fight Israel Adesanya. The current UFC middleweight champion Israel Adesanya will defend his belt against Jared Cannonier at UFC 276 on July 2nd. In the same month, former 185lbs champion Rockhold will make his long-awaited return at UFC 277. He will fight Paulo Costa on the main card of the event.

Rockhold fought the former light-heavyweight champion Jan Blachowicz in his last outing at UFC 239. Jan won the bout via a vicious knockout that broke Luke’s jaw. Following that, he took a long break from active competition. But he will finally come back after 3 years and he will take on Costa who is ranked no. 4 in the division. Hence, the talks of a title shot for Luke Rockhold are not unjustified.

During a recent interview with Submission Radio, the 37-year-old spoke about possibly fighting Adesanya in the near future. According to him, It will not matter whether Israel has the championship belt or not, Luke wants to go up against Izzy because he is the best in the world. Luke Rockhold said,

Will Luke Rockhold get a title shot after UFC 277?

If Luke Rockhold beats Paulo Costa, he will have the likes of Robert Whittaker, Marvin Vettori, Sean Strickland and Derek Brunson ranked ahead of him. Whittaker and Vettori are already in talks to fight each other at UFC Paris. That takes them out of the equation for the time being. That leaves Brunson and Strickland as possible options for Rockhold after Costa.

There is already some pre-existing heat between Luke and Sean. Luke has already commented on possibly fighting Strickland before. it will certainly be an interesting fight between the two stylistically. But the UFC may decide to give the title shot to Luke without him fighting any other contenders.

The middleweight champion Israel Adesanya has more or less beaten all the other contenders in the division. Hence, a fight with a veteran such as Rockhold will be an exciting matchup for all the parties involved. Rockhold is still very popular with the fans which may translate to more PPV buys. As the result, the bout will be lucrative financially.