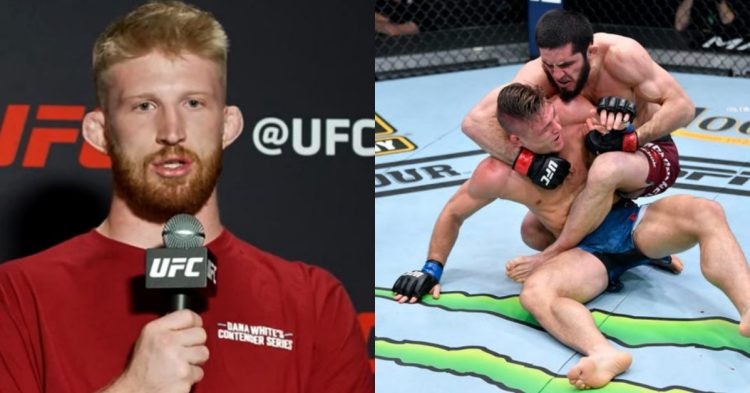 Bo Nickal speaks on the importance of wrestling (Credit: Twitter)

The UFC middleweight division is full of elite fighters such as Israel Adesanya, Robert Whittaker and Alex Pereira. Although all of them have a very well-rounded skillset, none are elite wrestlers. But, the inclusion of Bo Nickal means the division has a dominant grappler in it. Nickal’s first two bouts in the Dana White’s Contender Series (DWCS), have made some fans call him a future champ.

Recently, Bo Nickal spoke to former UFC middleweight champ Michael Bisping. During their conversation, Bo expressed why most strikers struggle to make an impression against a wrestler. According to Bo, most MMA fighters focus more towards the striking aspect of the game rather than learning how to improve their grappling.

“Yeah, you know I think it’s right on line with what you’re saying. You know, I think initially, you know people probably with high-level wrestling background, get into Mixed Martial Arts and think, “Oh, I need to like kind of level up my boxing or my striking in general just to kind of become more well-rounded. And I think as you do that, and you fall away from training wrestling every day. At the end of the day, when you go into a fight, you’re gonna do what you train,” said the wrestler.

Bo Nickal is perhaps the best amateur wrestling prodigy to fight in the UFC. He is a 3-time NCAA Division 1 National Champ representing Penn State. In 2019, he won the US National Championship and the Under 23’s World Championship. In his 3 MMA fights so far, Bo finished all his opponents. In his last bout in September, Nickal submitted Donovan Beard via triangle choke.

Bo Nickal reveals the reason behind his elite wrestling skills

During the interview, Bo Nickal took issue with how most MMA gyms operate. The 26-year-old stated that he gets the opportunity to practise his drills with some of the best wrestlers in the business. However, not all gyms have the level of grapplers at their disposal that Bo has. As a result, he has one of the best ground games in the promotion despite not having a single fight in the UFC main roster.

“I think most guys aren’t wrestling everyday, most guys don’t have high-level wrestling. They don’t partners like (Me). I’m still at Penn State, I build a gym out here. So I’m wrestling with the best guys in the world, every single day. Not only the best guys in MMA, the best actual competition wrestlers in the world. And most MMA gyms and places, they don’t have access to those types of things. So they’re just mostly training striking and I think that’s what kinda comes out in the fights.”

Bo Nickal certainly has a point in his statement. Most of the current UFC champs like Islam Makhachev, Aljamain Sterling, Amanda Nunes and Valentina Shevchenko, are amazing grapplers

On top of that, fighters like Shavkat Rakhmonov, Khamzat Chimaev and Umar Nurmagomedov are dominating their opponents based on their wrestling. Even Khabib Nurmagomedov, who went unbeaten in his career, was a wrestler.

Strikers like Leon Edwards and Israel Adesanya are certainly entertaining to watch. But someone like Islam Makhachev is a nightmare match-up for anyone because of his grappling. Hence, regions like Dagestan are dominating the MMA landscape because of their emphasis on wrestling.

Although Bo was set to fight Jamie Pickett at UFC 282, his debut was postponed due to an injury. He will most likely make his UFC main roster debut early in 2023. Although ex-fighters like Henry Cejudo believe he will become the champ right away, it will be interesting to see if UFC books him against a ranked fighter or not.