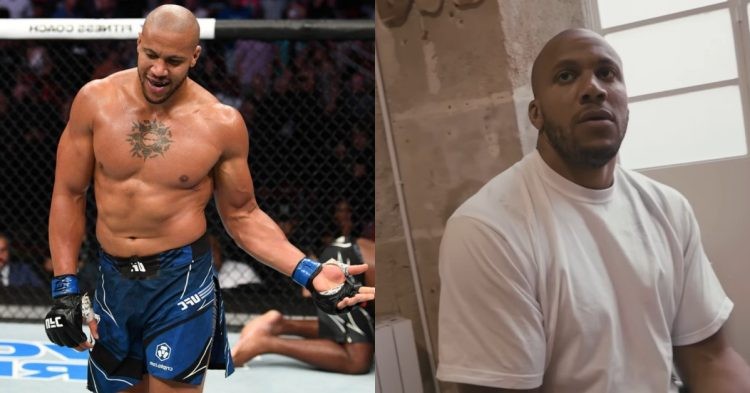 Dancing or fighting, movement is very important to achieve success. Ciryl Gane has decided to combine both in order to refine his technique. Ciryl has a big fight coming up this weekend against Tai Tuivasa. They will headline the very first UFC card in France on September 3rd.

Ahead of the aforementioned UFC Paris, Gane has revealed the secret behind his impressive striking. Coming from a Muay Thai background, Gane is very nimble on his feet. It was on full display against Derrick Lewis at UFC 265. Lewis is one of the most fearsome punchers in the heavyweight division and Gane’s game plan was masterful against him.

Not only did Gane successfully evade all of Lewis’ strikes, but he also displayed excellent footwork to maintain his distance. Derrick could not keep up with Gane’s movements and ultimately got exhausted. In a recent documentary on him on Dan Hardy’s YouTube channel Full Reptile, Gane finally revealed that dancing has immensely contributed to his elite movement inside the Octagon.

“Yeah, when you’re busy with your body, you’re gonna be better for every sport, that’s 100%. When you look at combat, the boxing, like to dancing, this is the better style you can see on the ring… dancing every time, it’s really hard to touch him, you touch him, this from dancing.”

As mentioned above, the Frenchman will fight the no. 3 ranked Tai Tuivasa this Saturday. He is ranked 1st in the heavyweight division and a big win against Tai will certainly put him in a good position to fight for the belt once more in the near future.

Ciryl Gane’s introduction to fighting was with Muay Thai. He had his first pro-fight against Cyril Omahri in 2014. He announced his arrival in a spectacular way as he knocked Omahri out in the first round. Before deciding to jump to MMA, Gane had an undefeated record of 13-0. He is also a one-time AFMT heavyweight champion.

He defeated Jeremy Jeanne to get the belt. His last Muay Thai fight came against Daniel Lentie in 2018 and the 32-year-old won the bout via first-round TKO. Gane also made his pro debut in 2018 as he faced Bobby Sullivan on August 2nd. To everyone’s surprise, Bon Gamin won the fight via submission. The fight was for the vacant TKO heavyweight title.

He defended the belt twice against Adam Dyczka and Roggers Souza respectively before moving to the UFC. He got the chance to fight in the UFC after only 3 pro fights and made the most of it. Gane faced Raphael Pessoa on his debut and won via arm-triangle choke. He went on a 7-fight win streak which saw Ciryl Gane becoming the interim UFC heavyweight champ at UFC 265.

However, he lost to Francis Ngannou at UFC 270 for the undisputed title. Although Gane lost the bout in a decisive way, he will definitely want to bounce back in a big way against Tuivasa to show the fans that he is still a big player in the division.

In total, Ciryl Gane has 4 KO finishes in his MMA career and 9 in his Muay Thai career. It would not have been possible for Gane to do so if he was just any other heavyweight. His footwork sets him apart from the rest of the pack. Gane also has 3 submission wins in his MMA career as well.