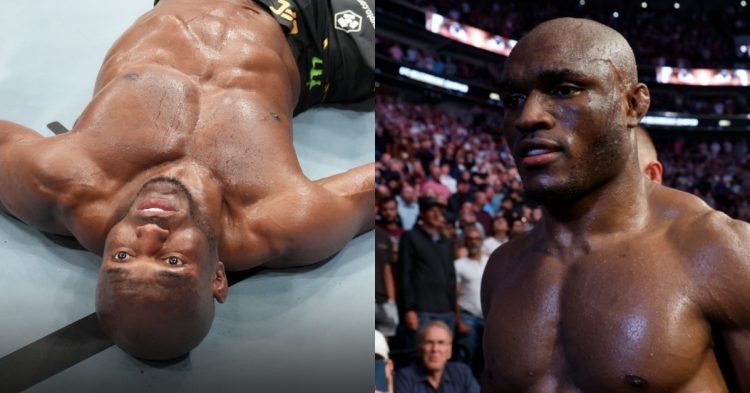 Nothing in the fight game is permanent and former UFC welterweight champ Kamaru Usman is finding that out in the worst way possible. Usman has not really had the best of time in the past few weeks. At UFC 278, he lost his title to Leon Edwards in a crazy finish. But now, it looks like that Usman has lost a lot more than that as well!

Will Harris is the man behind the acclaimed YouTube channel Anatomy of a Fighter. He has worked with Kamaru in the past and captured the former champ’s journey to the PPV in Salt Lake City. It also gave the fans a glimpse of what Kamaru’s immediate reactions were to the loss. Hence, it is safe to assume that Will and Usman are pretty good friends.

Harris recently appeared on UFC commentator Joe Rogan’s podcast, The Joe Rogan Experience. He made a shocking revelation to Joe and stated that Usman has lost sponsorships following the heartbreaking defeat at UFC 278. According to Will, some of the sponsors jumped ship as soon as Usman lost to Leon.

“I don’t know if he’d want me to say this, but basically he was just like after he lost, even some of the sponsors are not around no more. It’s just crazy like, he’s still the no. 4 P4P fighter in the world. He was just dominating a fight, you got head kicked, lost in the last minute. And now sponsers are like, ‘we got a new champion, let’s go over here.'”

Kamaru Usman has had sponsorship deals previously with Reebok and Trifecta. In August, he also had a brand new NFT deal with UFC Strike. So Usman was definitely flying high and bagging endorsement deals left and right. But perhaps his biggest deal for him was getting a role in the upcoming Marvel movie, Black Panther 2. However, now that his time as the champ is over, it looks like the opportunities are drying up.

Kamaru Usman will get the rematch against Leon Edwards in 2023

Kamaru Usman’s loss against Leon Edwards can be labelled as, perhaps the greatest upset in UFC history. Although the kick from Leon can not be called a lucky one, it was certainly unexpected. The kick seemed to catch Usman off-guard. However, it looked like Kamaru handled the loss well and is very much looking forward to the rematch.

Although Jorge Masvidal tried to hijack it and get the fight against Leon in 2023. However, the champ himself has clarified that it will be Kamaru Usman who gets the first crack at his belt. UFC usually does not like putting on immediate rematches, but nobody will blame the promotion for giving the shot to The Nigerian Nightmare.

Before the loss, Usman was touted to be one of the best welterweight fighters in the UFC. He had 5 title defences and was beaten for 15 fights in the UFC. So his resume certainly warrants a rematch with the current champ. If he can make slight adjustments, it’s hard to see how he losses the rematch unless his chin is completely gone.