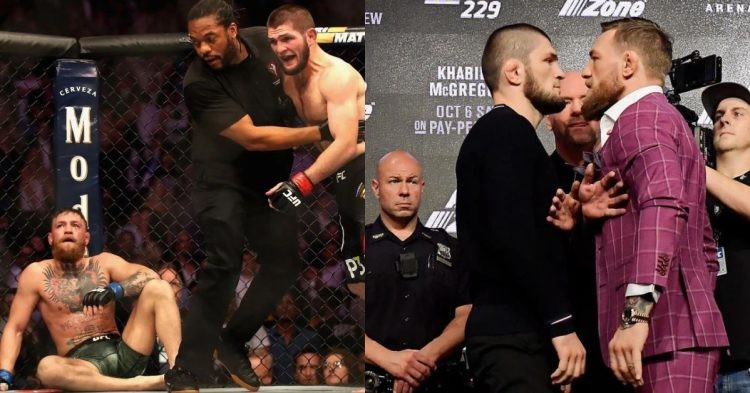 When Conor McGregor and Khabib Nurmgamedov squared up for the UFC Lightweight Championship at UFC 229 history was made.

Their bout has a deep history. Conor McGregor won the UFC Lightweight Title at UFC 205 after defeating Eddie Alvarez. The night after Khabib defeated Michael Johnson by submission, he branded him a “chicken” and asked him out. During the weigh-ins for UFC 205, they also got into a fight


When McGregor’s title was ultimately revoked. Khabib defeated Al Iaquinta to win the UFC Lightweight Championship at UFC 223. At UFC 229), Conor vs. Khabib established a new record for attendance.

McGregor and Nurmagomedov entered the Octagon as the pay-per-view finally occurred. Khabib outclassed McGregor in a four-round contest. Conor McGregor had to tap out of the bout early in the fourth round despite the two fighters putting on a display.

Khabib post the bout lost his cool. He climbed the Octagon cage and dove into McGregor’s corner to fight Dillon Dannis, who had insulted Khabib in an attempt to get his attention.


Additionally, Conor McGregor got into a fight with Khabib’s cornermen after they ascended the Octagon to taunt and attack him.

The audience in the T-Mobile Arena began to fight among themselves as the wild mood spilled into the crowd.

Fans reaction on the anniversary of Conor Vs Khabib

Like mentioned, that Conor McGregor Vs Khabib Nurmgamedov was historical match. To the extent, even after 4 years it is talked about. Here are few examples of fan reactions:

“the day Khabib restored order in the fight game”

“Will this remain the biggest fight in UFC history? Only time will tell”
“The baddest event to ever happen in UFC”
“Khabib always said Conor took it too far. But Conor only did with his words. Khabib committed aggravated assault this night, and it doesn’t get talked about NEARLY enough.”
Although, this is about the past as of now McGregor has made it plain that he wants to face Kamaru Usman, the welterweight champion, in his next bout. However, since then, Usman is no longer the champion. So it is unclear of what is next for the former two division champion. That being said, his comeback will be a massive spectacle for the sport.
Tags: Conor McGregor
Previous Post