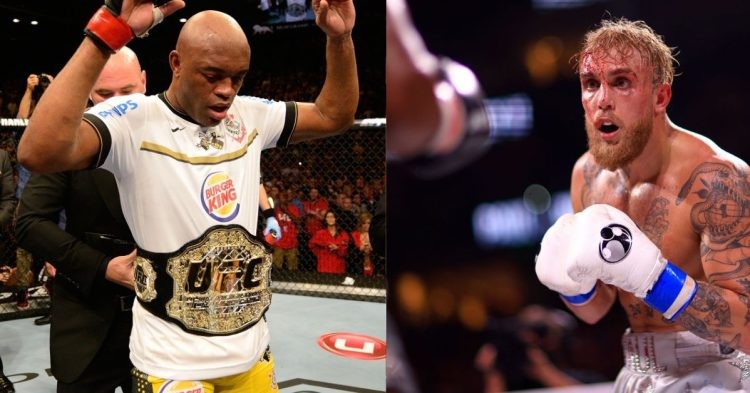 According to Jake Paul’s announcement, he will compete against Anderson Silva next month. The YouTube sensation was intended to meet Tommy Fury at Madison Square Garden in early August, but the match was cancelled because the British fighter was barred from entering the country.

Anderson Silva has experienced the pinnacle of the mixed martial arts (MMA) world and is fully aware of the potential financial rewards. Since becoming involved in combat sports, Paul has made a point to draw attention to problems with fighter compensation and believes that this upcoming battle may be the biggest in terms of numbers in Silva’s long career.

He takes immense pride in the paydays he gets to give to his opponents. That is why, during the pressor, he was asked whether or not he thinks Silva will make garner the biggest payday of his life.

To which, he stated, “I do think so, I think this could be the biggest payday of his career, Just because this is like my first big fight. As crazy as that sounds, all the other fights have been like decent, but this is the first big, big fight, with another massive name who brings a ton of business to the table.”

The compensation from contracts, brand endorsements, and personal assets are included in the net worth. In addition to an additional $50,000 if he wins Performance or Fight of the Night, he makes about $620,000 every fight.

Brazil was the location of Anderson Silva’s first professional match. He had a welterweight victory in 1997, which was followed by another victory. Anderson won his next nine fights following a defeat in 2000. What he has accomplished since is history.

He is considered one of the greatest MMA fighters to ever grace the sport and the greatest middleweight fighters of all time. What he does in the future would be interesting to see. Considering his age, the type of performances he has put out is unprecedented.

“He Just Thinks It’s Hell, He Hates It”- Khamzat Chimaev Hates Cutting Weight for Welterweight, Wants to Fight in Middleweight Next