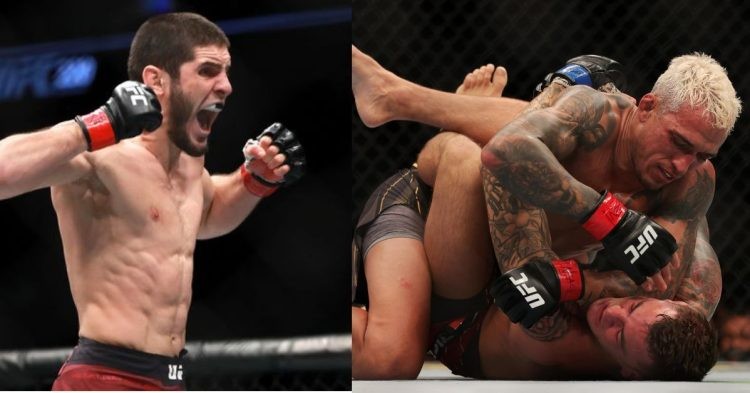 Islam Makhachev is on the precipice of making history. Fighting for the lightweight title against Charles Oliveira, Islam has the chance to live up to the support and expectations around him.

Coming into fight week, Makhachev believes that his opponent, Oliveira, is massively overrated. Despite having an insane record and win streak, Islam does not believe that ‘Do Bronx’ will live up to the hype.

Talking to Daniel Cormier, the Russian gives his take on the former lightweight champ. “All this guy — Chandler, Gaethje, Poirier, who? This guy all don’t have nothing. In the ground, they, I don’t know.” Particularly, Islam mentions Dustin Poirier. “Black belt, who give him that? We have to check that now. And we have to cancel, brother, many black belt because they make the jiu-jitsu look bad because a lot of guys have black belt but I don’t know.”

Previously, Dustin Poirier took on Charles Oliveira at UFC 269. Despite a strong start on the feet, Poirier succumbed to Oliveira’s superior grappling skills and was submitted in the third round. Makhachev criticized Poirier for his poor showing and failed attempt at a ‘Granby roll’.

Makhachev believes that all of Oliveira’s victories have come against opponents with poor grappling skills. As such, he feels that they were hesitant to attack Oliveira on the ground as they feared his BJJ, which is why they lost to him.

What is the future for Islam Makhachev?

For the most part, Islam feels confident that he can easily put away Oliveira and make a statement. However, there is a lot of speculation regarding what he will do next. After all, the lightweight division is the busiest and most competitive division of the UFC.

After winning the title, Makhachev will have a whole host of opponents to fend off. With names like Gaethje, Chandler, and Poirier circling, Islam will have a fair bit of thinking to do for his next opponent. Moreover, Islam is Khabib’s protege and will have to continue the legacy his predecessor left behind.

With so much belief and hype behind Islam, will he be able to live up to everyone’s expectations? Who do you see him fighting for his first title defense? Leave your thoughts in the comments below.