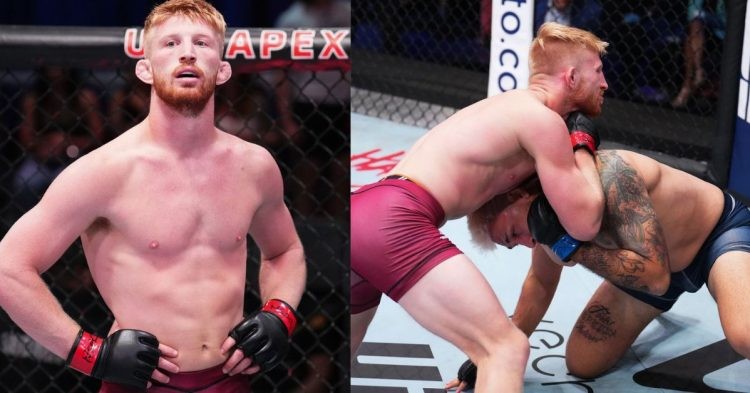 Bo Nickal is the hottest prospect in the UFC right now

Bo Nickal is one of the most talked about rising prospects in the UFC right now. He is a former NCAA Division 1 Wrestler and has amassed a phenomenal wrestling record on his resume before stepping into the world of MMA.

After two impressive wins in season six of Dana White’s Contender Series (DWCS), Bo has landed a spot on the UFC roster. Here’s everything you need to know about the rising star.

Who is Bo Nickal?

Bo also got Gold at the 92 KG US National Championship, Las Vegas held in 2019. In his last freestyle wrestling outing, he won Gold in the 92 KG category of the U-23 World Championship, 2019 Budapest.

Apart from this, he has competed in submission grappling matches and fought to two draws and one loss. He was also one of the finalists in the 2020 US Olympic wrestling team trials.

To hone his MMA skills, on top of his elite wrestling, Bo Nickal joined one of the most recognizable MMA teams, the American Top Team in Coconut Creek, Florida. There Bo trains with UFC star Jorge Masvidal and other reputed coaches. According to Nickal, ATT has played a huge part in his professional MMA journey.

After the Olympics, Bo Nickal made his professional MMA debut with Jorge Masvidal‘s iKon FC 3. However, he won his pro debut against John Noland via a first-round KO. It is then that the American was picked up by Dana White for the 6th season of DWCS.

He made quite a statement after a 1st -round submission win over Zachary Borrego. After this dominant win, he gained a lot of hype and attention however, as per Dana; Bo needed to prove himself before coming to the UFC.

In his second fight on DCWS, Nickal continued his impressive win streak against Donovan Beard. In this fight, he also got an impressive submission win under just 52 seconds. This fight proved his worth being in the UFC and White finally got Nickal a much-deserved UFC contract. Bo currently has a record of 3-0 in professional MMA.

Here is how Bo earned his UFC contract: