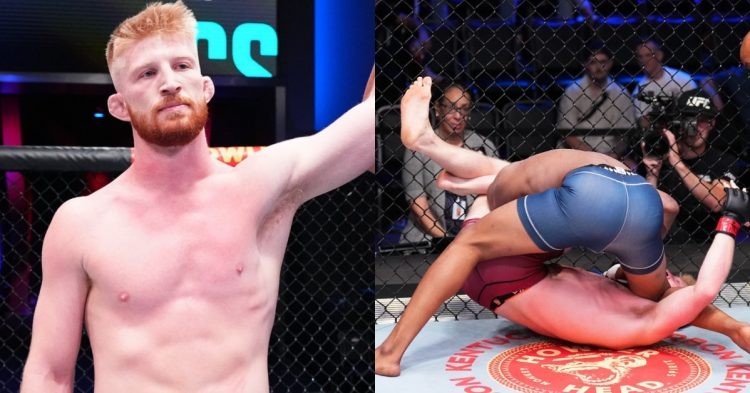 Bo Nickal finally earns the UFC contract on his second try. The accomplished amateur wrestler first appeared on Dana White’s Contender Series on August 9th earlier this year. All it took Bo, was only 62 seconds to submit his opponent, Zachary Borrego, via rear-naked submission. However Dana White did not offer him a contract as he wanted to see more from Bo.

Hence he promised to bring Bo Nickal back for another fight at DWCS. Dana kept his word and matched him up against Donovan Beard at DWCS 56. But the middleweight fight lasted only 52 seconds this time. Bo dropped Donovan with a big overhead right and finished him with a triangle. Although Dana was apprehensive the last time, he did not hesitate to offer him a contract this time around.

But that is just not it! UFC President was so impressed with the middleweight fighter’s performance that Dana even took the decision to include Bo Nickal in the UFC video game, UFC 4. So it looks like it was a special night for one of the most special amateur wrestlers to compete inside the Octagon.

Bo Nickal is one of the best, if not the best amateur wrestler to grace the Octagon in recent times. He won the U23 World Championships and US National Championships in 2019. He is also a three-time NCAA Division I National champ in 2017, 2018 and 2019. His skills are elite and it looks like the UFC middleweight division is set to welcome another young prospect to the division.

BO NICKAL GETS IT DONE IN UNDER A MINUTE! #DWCS pic.twitter.com/IDkLeYpj7F

Following the exit of Yoel Romero from the UFC, there was definitely a lack of a fighter with credentials in amateur wrestling. However, with the inclusion of Bo Nickal and Khamzat Chimaev’s permanent move to 185lbs, it looks like the weight class is set to receive the injection of some fresh blood. If Nickal’s last two outings inside the Octagon are any indication, he is set to make a run for the belt sooner rather than later.

Even fans are impressed with how easily Bo won on the night. While some are very impressed with his wrestling skills, others think he is already a Top 5 middleweight fighter in the UFC!

Got dang that was a smooth triangle 😦😦😦

His opponent was perplexed, like ‘wtf is he doing?’ pic.twitter.com/qUtJINfI8t

What do you make of Bo Nickal’s performance at DWCS 56? Do you think it is soon to hype him up? Or, is the chatter around him justified? Let us know in the comments down below!