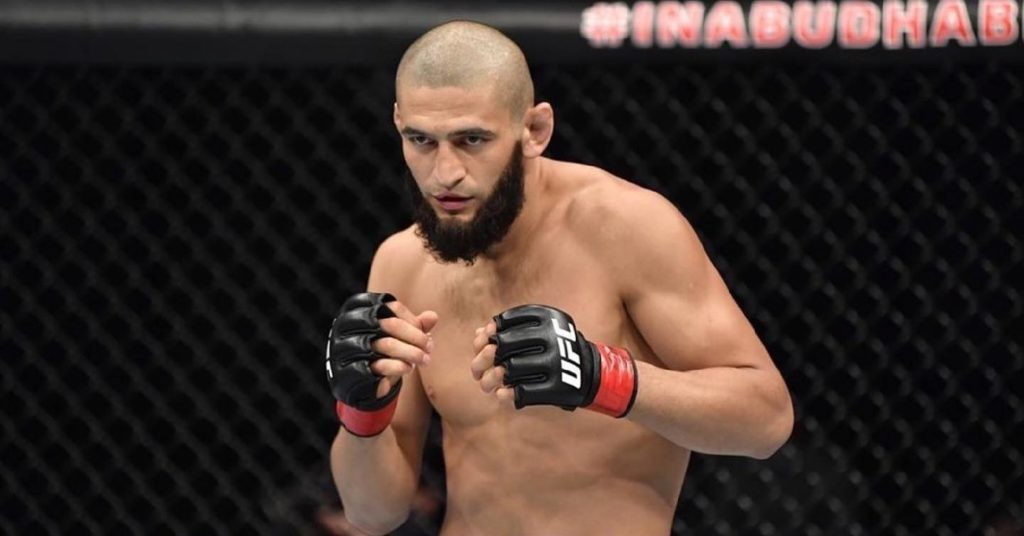 UFC Welterweight contender Khamzat Chimaev is one of the rising stars of the UFC right now. Recently, Chimaev sat down with BT Sport for an interview in the lead-up to his return into the octagon at UFC 267. ‘The Borz’ has not competed since September 2020 when he stopped Gerald Meerschaert via a first round knockout.

Khamzat Chimaev’s 3-0 run in the UFC consolidated his hype, however, he was not able to capitalize on the momentum and has been out of action since September. In the past few months, Chimaev had his fair share of lengthy battle with COVID-19 and has missed out on several marquee showcase match-ups.

After a year long layoff, Khamzat Chimaev is scheduled to fight Li Jingliang at this weekend’s UFC 267. But before the fight, Khamzat Chimaev gave an interview to BT Sport in which he was asked to give his thoughts on the upcoming UFC Welterweight title fight between Kamaru Usman and Colby Covington at UFC 268.

To which, ‘The Borz’ had some interesting takeaways. “I don’t know, I think Usman is more favorite in this fight, but they look both same fighters. A little bit wrestling, a little bit striking, and strong guys. Nothing special.” It seems obvious that Khamzat Chimaev is not impressed by the skill sets of either Kamaru Usman or Colby Covington. However, he cannot deny the fact that both Usman and Covington are placed atop at one of the most competitive divisions in the UFC.

In an interview with James Lynch back in June 2021, Colby Covington had criticized the UFC for hyping up Khamzat Chimaev, labelling their promotion of ‘Borz’ as a “complete joke. Covington also stated that he has never even heard of Khamzat Chimaev and asked whether Khamzat has any wins over ranked guys.

“I’ve never even heard of him. Does this guy have a ranked win yet? Oh, he doesn’t. Everybody’s hyping these kids up these days. That’s the state and age of the UFC now. It’s all about hype. There’s no credibility, I wouldn’t say there’s no credibility, the UFC is a great organization, but the way people get the hype on them is just a complete joke.”

There could be a possibility of a match-up between Colby Covington and Khamzat Chimaev in the near future, but for now, they both are facing different opponents. Chimaev is scheduled to fight Li Jingliang at this weekend’s UFC 267. Whilst Covington will be facing Kamaru Usman for the welterweight title at UFC 268.