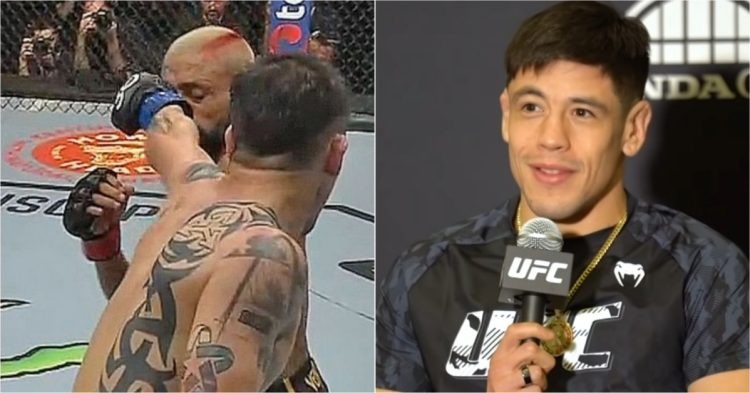 The UFC 283 co-main event ended in quite a controversial and unsatisfactory manner. The fourth match between Deiveson Figueiredo and Brandon Moreno for the flyweight title ended right before the 4th round began. The fight was stopped by a doctor after the local hero Figueiredo suffered a nasty cut above his eye. Figueiredo initially believed it was an eye poke, before realizing later that it wasn’t the case.

Despite finally breaking the deadlock in their rivalry, it wasn’t a night to remember for Moreno. He was pelted by bottles and other projectiles by the angry, Brazilian crowd. The Assassin Baby later addressed the controversial stoppage at the post-fight presser, saying, “The hook was clear, right in [Figueiredo’s] right eye. Then, maybe that’s why people were a little confused because I pushed his head with my hand… Maybe that’s why the people were a little bit mad with me.”

Moreno was certainly ahead on the judges’ scorecards during the 3 rounds of the fight. He outstruck his rival, landing 48/74 compared to Deiveson’s 19/43. He also managed to take down the former champion more times and had much more control time by the end of the fight.

The new UFC flyweight champion is seemingly taking the fan backlash in his stride. Brandon Moreno, despite having a rough night outside the octagon, certainly brought the best version of himself into the cage. He and his fans will hope that he has a long and uncontroversial title reign.

In spite of the fact that the crowd in Brazil got a little rowdy after seeing the fight stopped before the championship rounds, many fans and fighters alike showed appreciation for Moreno and his win. They also came to his defense over the allegations of him using “dirty” tactics during the fight.

@theassassinbaby is my favorite fighter #UFC283

ASSASSIN BABY!! WAY TO GO BROTHER! SO PROUD AND HAPPY FOR YOU! #UFC283

I’m so stoked for Moreno! He earned this moment in life and solidified himself into history. #UFC283

Nothing dirty at all, clean shot by the new champion Brandon Moreno! #UFC283 he really outclassed Figgy tonight. He was cruising

Rio fans showering Moreno on the way out with drinks. Horrible.

Regardless of all the controversy, Brandon Moreno had a phenomenal showing at UFC 283. Deiveson Figueiredo, even at the age of 36, is one of the best flyweights in the world with insane punching power. However, it seems this rivalry has finally reached its conclusion at UFC 283.

What do you make of the situation? Do you think Moreno poked Figgy in the eye intentionally? Or do you think it was an accident? Let us know in the comments down below.