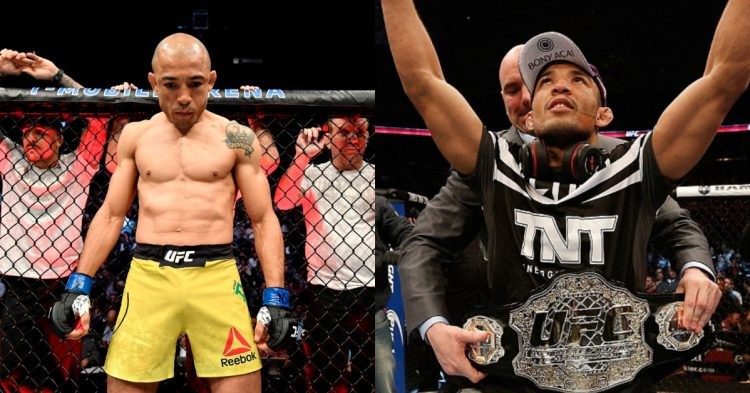 Sad news for MMA fans all around the world as Jose Aldo decides to retire from the sport of MMA. The former UFC featherweight fighter last competed against Merab Dvalishvili on the main card of UFC 278. Following the bout, there were talks of him walking away from the sport for good. A recent report from Combate seems to confirm the news that Aldo is indeed done.

Recently, Jose’s head coach Andre Pederneiras spoke about what he would like to see the fighter do. He expressed the desire to see The King of Rio retire. The move to bantamweight from Jose was a desperate move to become a UFC champion once again. Although he came close, it did not happen as he lost to Petr Yan at UFC 251 for the vacant bantamweight title fight.

Although he then put together three back-to-back wins over the likes of Marlon Vera, Pedro Munhoz and Rob Font, the loss to Merab has hurt him deeply. In the fight, Jose seemed extremely gun shy and his performance was not awe-inspiring. He realized that as well and the decision to retire comes within a month of the last loss.

Although Jose Aldo was on the wrong side of 30, he still had one fight left on his existing UFC contract. With a major PPV set to take place in Brazil next year in January, it seemed like Jose was a guarantee to fight on the card. Despite his recent shortcomings, he remains one of the most popular fighters in the country. So fans thought he will retire after fighting infront of his home crowd once more.

However, Jose has seemingly had enough of the sport. At the age of 36, it was going to be near impossible for him to climb up the rankings once more to challenge for a championship once again. MMA journalist Aaron Bronsteter reports that Aldo is no longer a part of the USADA testing pool. He has also been removed from the 135lbs rankings.

So it pretty much confirms that Jose Aldo is no longer a part of the UFC. At the time of UFC’s takeover of WEC, Aldo was the featherweight champ. The company decided to crown him their inaugural 145lbs champion. He went on to defend the belt 6 times before dropping it to Conor McGregor at UFC 194. He finishes his career with a record of 31-8.