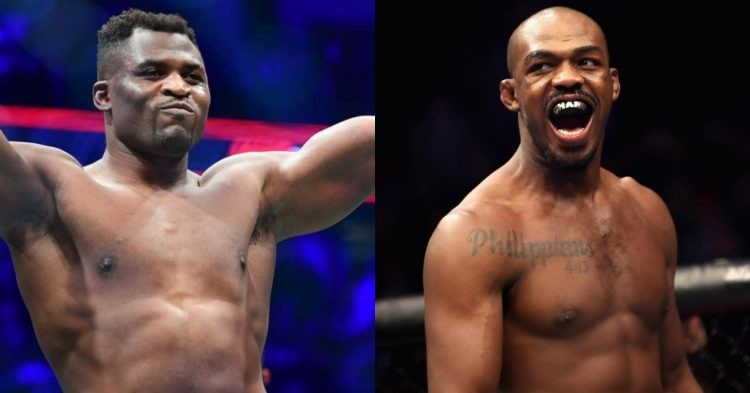 Jon Jones vs Francis Ngannou for the UFC heavyweight title in 2023? (Credit: Twitter)

Former UFC light heavyweight champ Jon Jones (26-1-1) eagerly awaits his return to the Octagon. He gave up his 205lbs belt in 2020 and started preparing for his run at heavyweight. For years fans wanted to see him fight at heavyweight. Hence, they rejoiced once Jon announced his decision to move up. But the excitement slowly faded as he did not fight for over two years!

However, fans can get their hopes high once more as there is some massive development regarding Jon’s heavyweight debut. According to a report from MMA Junkie, UFC is looking at UFC 285 as the PPV where Jonny Bones will make his long-awaited return. But who is going to be his opponent?

The report adds that the heavyweight champ Francis Ngannou (17-3) is the first choice to face Jones. UFC will kick off 2023 with a big PPV event, UFC 283, in Brazil. In February, the company will travel to Australia for UFC 284, where the lightweight champ Islam Makhachev fights the 145lbs champ Alexander Volknovski. Now Jon’s potential return at UFC 285 will get the fans excited for sure!

Jon Jones desperately wanted to fight at UFC 282 to close out 2022. He even teased his return on Twitter. But, the UFC scrapped those plans as they wanted Jon to fight for the belt on his heavyweight debut.

So the company pushed his return to 2023. However, there is a lot of uncertainty regarding Francis Ngannou’s future. Prior to his fight at UFC 270, Ngannou suffered some serious damage to his knee.

After beating Ciryl Gane at the event in January, Ngannou had reconstructive surgeries on his knee. So there are internal doubts in the UFC about his availability for the event in March of 2023, despite his impeccable recent shape.

So this report rules out Stipe Miocic‘s involvement in Jon’s heavyweight debut. Previously, UFC President Dana White told the press that Miocic (20-4) is the likeliest option for Jon, if ”The Predator” is unavailable. But it does not look like the 40-year-old is anywhere near the picture for the fight. As far as Curtis Blaydes is concerned, he is a great wrestler and has won 7 of his last 8 fights.

Aside from his wrestling prowess, Curtis has also added the threat of striking to his arsenal. He is not a small heavyweight either and is ranked 3rd in the division. So Jones is in for a tough bout on his heavyweight debut regardless of his opponent. UFC 285 goes down on March 5th, 2023, inside the T-Mobile Arena in Las Vegas.