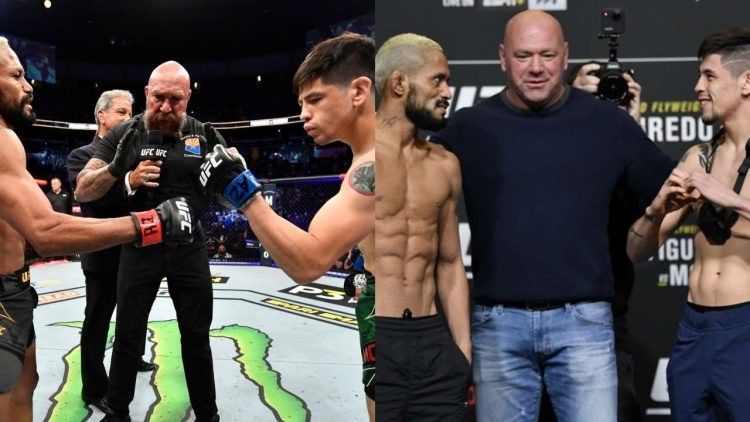 Brandon Moreno and Deveison Figueiredo have unfinished business, even after three grilling fights. With the first bout a draw, and the second and third being wins for either fighter, the contest is far from settled. As such, reports indicate that Figueiredo vs Moreno 4 will take place at UFC 283.

Previously, Figgy defended his title against Moreno at UFC 256. However, Moreno shocked the world in the rematch, submitting the champion at UFC 263. In the trilogy fight that followed, the Brazilian reclaimed his title with a unanimous decision at UFC 270.

As such, the contest is currently at one apiece. Recently, Moreno also claimed the interim title in a ferocious contest against Kai Kara France at UFC 277. Now, we are set for the rematch and the fourth fight between Deveison and Brandon. According to Rodrigo Del Campo González, a title unification is being finalized for UFC 283 on Jan. 21 in Brazil.

Arguably the biggest fight in Flyweight history, fans are very excited for this one already. Hopefully, this time the contest will be settled, once and for all. Some fans have called for a draw or a no-contest just so they can see the pair fight for a 5th time as well.

With Figgy and Moreno, both head and shoulders above the rest of the division, the fight was always an eventuality. Despite a heated rivalry at times, the pair have often treated one another with respect and choose to do their talking on the pitch instead.

Following his victory over Kai Kara France, Brandon spoke on the rematch with Deveison. “Man, tell me another example [of a bigger fight], please. The 4 fights between Figueiredo and I is the biggest one, easily. Tell me the second place.” Rightfully so, the fight remains one of the biggest in the UFC which is surprising considering that the division was almost scrapped at one point.

As for Brazil, it has seen its fair share of legendary fights, and this one will be no different. With over 38 events, UFC Brazil, the first event there, featured the first ever UFC Lightweight Championship fight, as well as a Middleweight Championship fight. UFC 134, is another example where Anderson Silva defended his title against Yushin Okami.

Despite Figueredo having the home ground advantage, will Moreno be able to replicate his success and take home the title once again? Only time will tell.