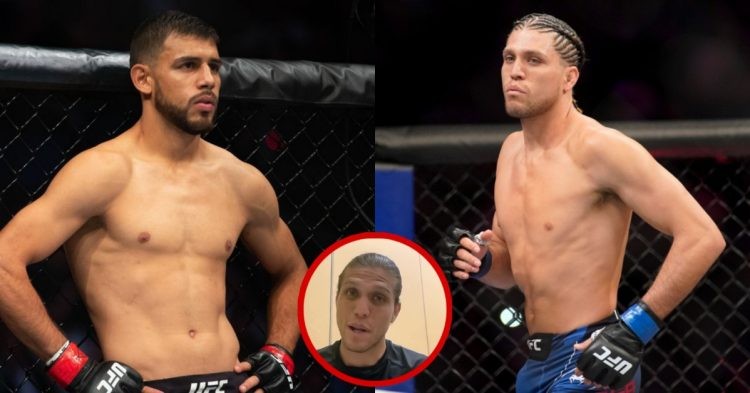 Brian Ortega vs Yair Rodriguez goes down this weekend in the main event of UFC Long Island. The contest holds implications on the title scenario as the winner here may go on to face the champ Alexander Volkanovski. Hence, the bout has a lot of stakes behind it. However, neither Ortega nor Rodriguez wanted to face each other initially.

“It s****d man. They called me and told me ‘we got your next opponent’ and then my first thing was is there anyone else. They thought that I was being scared or something. Nah man it’s just not someone that I’m trying to fight with.”

However, the UFC let Ortega know that Rodriguez was his only option to fight. The other top-ranked contenders like Max Holloway and The Korean Zombie are coming off of losses to the champion. As a result, fighting the 29-year-old was his only option of getting back to the title picture. Hence, both Brian and Yair decided to accept the fight.

How did Brian Ortega and Yair Rodriguez become friends?

The former featherweight title contender Brian Ortega also revealed how he and Yair Rodriguez became friends. Ortega stated that they first met in 2018. Brian was about to fight Frankie Edgar at UFC 222 and he ran into Yair Rodriguez. They had a brief interaction backstage and according to the LA native, Yair wished him luck for the fight.

Ortega found the gesture very heart-warming and the two became friends afterwards. Since then, the two have hung out quite a bit. Ortega revealed that Rodriguez even invited him to party with him down in Mexico. During the conversation, Yair also added that Ortega was in attendance to support him in his fight against Jeremy Stephens.

In return, Rodriguez also attended UFC 266 to support Ortega against Volkanovski for the title fight.

It will not be easy for them to stand across the Octagon from each other. But both of them are astute professionals and will keep their friendship aside for the fight. As mentioned above, the winner may get a championship opportunity. Hence, both of them will give it their all to win.

Who do you think will emerge victorious between Brian Ortega and Yair Rodriguez. Will the friendship between them affect their aggression in the fight? Let us know your thoughts on the matter in the comments down below.