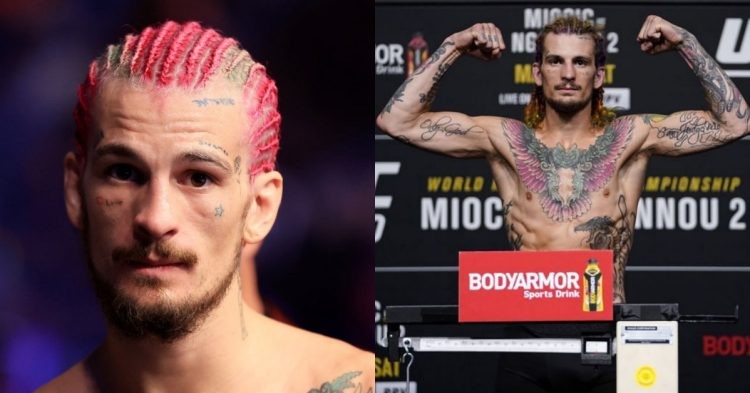 UFC 280 has the most stacked fight card of the year. In the main event, the no. 1 lightweight title contender, Charles Oliveira will fight Islam Makhachev. TJ Dillashaw will get the opportunity to regain his bantamweight title against Aljamain Sterling in the co-main event of the night. But that is not all from the 135lbs division, Sean O’Malley is set to go up against Petr Yan.

Although Sean is the 12th-ranked fighter in the division, it did not stop the UFC from booking the fight. He may not have the experience fighting at the top of the division, but one advantage that he has over Yan is his height. He is officially billed by the UFC as 5’11. However, he was recently exposed by a guest on his own podcast for lying about how tall he is.

Sean recently had a YouTuber by the name of MMA GURU on his podcast. During that podcast, GURU was asked to give his thoughts on how he thinks the fight may play out in the UAE. The British YouTuber did not hide his true opinion and stated that he thinks Yan will “destroy” The Suga Show. It offended Sean to an extent and he stated that at 5’5, Yan could not do much.

However, In a humorous exchange, GURU replied, “I understand, but you’re 5’9, that’s not really that tall.” O’Malley then continued the banter and said he was 6’3. Although the conversation seemed a bit combative, it was all in good fun as neither Sean nor Guru seemed too offended about it.

Is Sean O’Malley right about his height advantage over Petr Yan at UFC 280?

Petr Yan is the former UFC bantamweight champ. He is extremely durable and efficient with his striking. He also lands some nasty leg kicks. As evident by his loss against Marlon Vera, there is a weakness in Sean’s game when it comes to checking the leg kicks. But that is where the height difference may play a role. As mentioned previously, O’Malley is 5’11 and Petr Yan is only 5’7.

On top of that, he will have a 5-inch reach advantage and a 2-inch leg reach advantage. It means Petr will not be able to land significant strikes against O’Malley with ease. So there is some validity to Sean’s jabs at Yan’s height. He is an extremely fluent striker who is calm and composed in the face of adversity. There are chances that he will face pressure from the Russian fighter.

Hence, it will provide him with the chance to secure a potential knockout win. Petr is the odds-on favourite to win the fight at UFC 280 and rightfully so. But the division needs some fresh blood at the top and who is better to shake things up than Sean O’Malley?