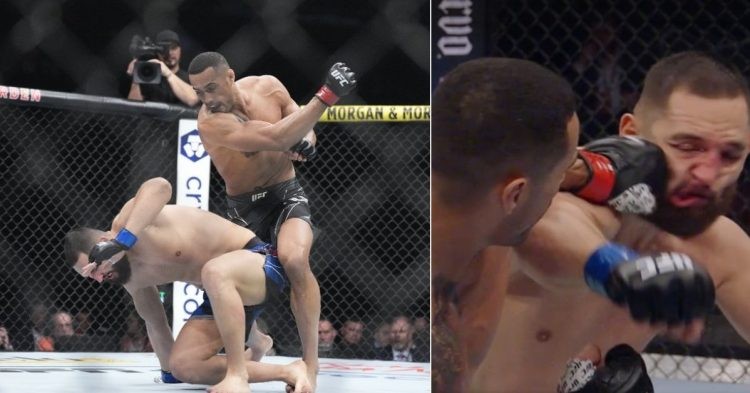 Carlos Ulberg put on a vintage classic to kickoff UFC 281 as he knocked out Nicolae Negumereanu to open the early prelims in a truly sensational performance by the City Kickboxing.

We saw a lot of Israel Adesanya in Carlos Ulberg as the light-heavyweight prospect made great use of his leg kicks to keep his opponent at bay. Right from the bell, Ulberg looked calm ad compromised Nicolae Negumereanu’s legs that allowed him to land punches from range.

A sitting left jab followed by a vicious left hook dropped Negumereanu, and then it was just about a couple of unanswered shots that completely shut the lights out of Nicolae Negumereanu, giving Ulberg his third straight UFC win.

With the victory, Ulberg is now 3-1 in his UFC career after the shocking loss in his UFC debut back at UFC 259 in March of 2021. Ulberg’s last two wins have both been via stoppage.

What’s next for Carlos Ulberg after UFC 281?

Carlos Ulberg is going to be a huge problem in the UFC’s Light Heavyweight division. The City Kickboxing star is an exciting striker, with a background in kickboxing.

With a team that comprises Champions like Israel Adesanya and Alexander Volkanovski, along with the likes of Dan Hooker, Kai-Kara France, and Brad Riddell among others, he is certain to improve as he goes forward in his mixed martial arts journey inside the UFC Octagon.

“I knew what I wanted to come and do, and we got the knockout. I’m happy for that.”

Carlos Ulberg is currently unranked in the UFC’s Light Heavyweight rankings, and it’s safe to say that he will find himself against a ranked opponent in his next fight. It won’t be wrong to say that we could see him next at UFC 284 which goes down in his subcontinent in Perth, Australia.

Khalil Rountree Jr. and Dustin Jacoby are both exciting options for Carlos Ulberg after the KO win at UFC 281.