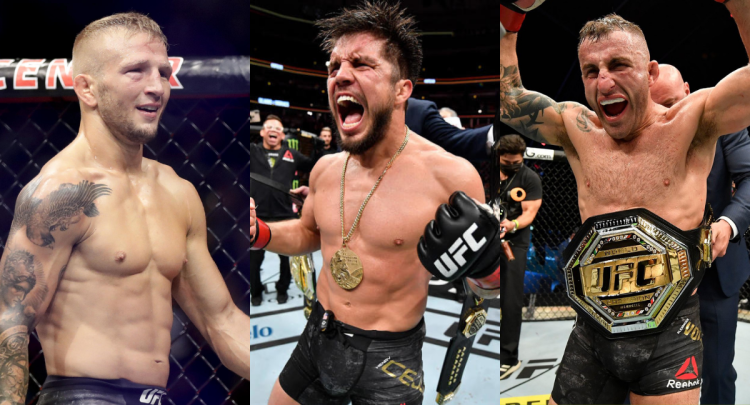 Henry Cejudo has been out of action ever since his 2020 bout against Dominick Cruz. Following his win over Cruz, ‘Triple C’ announced that he will be retiring from the sport. However, Cejudo has been teasing a return to the octagon for a while now. Moreover, his manager Ali Abdelaziz also revealed that the former double division champion had re-entered the USADA testing pool in April ahead of a potential return.

While there is no certainty as to who Henry Cejudo will face upon his highly anticipated return, former Bantamweight champion TJ Dillashaw has commented on a potential matchup between Cejudo and Alexander Volkanovski. During a recent appearance on The Submission Radio, Dillashaw suggested that ‘Triple C’ can prove to be a tough opponent for Volkanovski. He said:

“I can see him wanting to fight 45s because there is not much threat for him to possibly lose at 45s and if Volkanovski gets the job done against Max, I think Cejudo is actually a very tough fight for him if they give it to him if not, it comes to 35s.”

Henry Cejudo has made his intentions to fight Alexander Volkanovski clear

It has been a while since we saw Henry Cejudo inside the octagon. However, ‘Triple C’ had earlier suggested that he will unretire just to fight the UFC Featherweight champion Alexander Volkanovski. Cejudo retired with a professional record of 16-2, having simultaneously held the UFC Flyweight and Bantamweight championships.

All gold everything. @HenryCejudo #UFC238 pic.twitter.com/yVfuPW5Vs8

During an interview with TMZ nearly a year ago, he claimed that he was satisfied with everything he had done in his MMA career. Moreover, he said that he does not need to fight anymore. However, he named a potential bout against Alexander Volkanovski as the only matchup that would interest him to unretire. He said:

It will be interesting to see if Henry Cejudo can make his way back to the UFC and face Alexander Volkanovski or not.