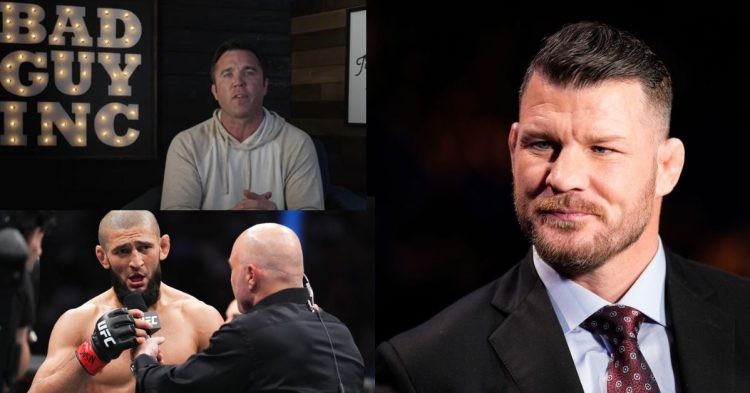 UFC Hall of Famer Michael Bisping believes Khamzat Chimaev is the biggest bad guy of the current generation in the entire UFC. These past weeks leading up to UFC 279 have been a bit too much for Khamzat. The Chechen was the center of the controversy during UFC 279 earlier this month.

‘Borz’ was rescheduled to face Kevin Holland in the co-main event, whom he had a backstage altercation with earlier along with Team Diaz. In a recent video, Michael Bisping stated that there have been many bad guys in the history of UFC but not like Khamzat. He said:

“He’s the biggest bad guy in the whole of the UFC right now. There have been a lot of bad guys along the way. Chael Sonnen doesn’t count because he’s not a bad guy he always claims to be.”

Quite shockingly Bisping stated that UFC legend Chael Sonnen is not a bad guy, even though Sonnen made his career portraying himself to be a bad guy. It could have been a publicity stunt to draw fans. Chael and Michael had crossed paths once, and even though Chael won that bout via decision, Bisping later stated that he’d beat Sonnen if they ran it back.

“Conor McGregor certainly fits that bill. I was a bit of a bad guy for a while but right now Khamzat Chimaev. The way he flips everyone off – people are intrigued by this guy.” – Bisping added.

Michael added that even Khamzat with his personality and antics has raised the bar of being a bad guy. Even though people hate him, they are all intrigued by his deed.

Khamzat Chimaev believes he can become a champion in three different weight classes – welterweight, middleweight, and light heavyweight. After dominating the welterweight, Chimaev is now thinking of moving up to middleweight.

‘Borz’ found a way to be the bad guy and turned heel at UFC 279. He Chechen snapped at the booing crowd of his weigh-in at UFC 279 and flipped off the crowd, gave them the finger, missed the weight that led to an entirely new main card, backstage brawls, and whatnot. All of these made him the center of chaos.

In the aforementioned video, Bisping stated that a victory against Paulo Costa will likely be enough for Chimaev to get a 185lbs title shot:

“If he [Khamzat Chimaev] goes and fights Paulo Costa, and if he beats him, he’s probably going to get a title fight at 185lbs, and 170 will seem like a distant memory.”

Paulo is a massive fan favorite and given the altercations with ‘Borrachinha’, Khamzat might just see himself in a fight at middleweight soon.

“Costa’s talking a lot of sh*t and he’s trying to get Chimaev to take the bait. He’s doing the right thing. That would be a massive fight,” Bisping concluded.

Along with Bisping, many believe that Chimaev likely won’t return to welterweight after his staggering weight miss against Nate Diaz at UFC 279. And if he gets the title shot in the middleweight division, that is if he proves his ability in the 185 lbs division.