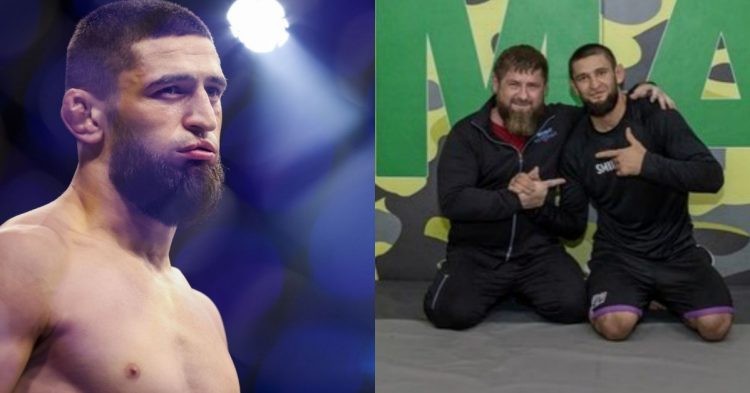 Former UFC middleweight title challenger Chael Sonnen shares his thoughts on all the drama surrounding Khamzat Chimaev. For fans who are unaware, news broke earlier that Chimaev’s passport was seized and he was apparently forced to stay in Russia. The incident allegedly took place while Khamzat was on his way to his home country of Chechnya.

It concerned the fans a lot as Chimaev is an elite fighter and he is on his way to fighting for a UFC championship belt soon. However, Majdi Shammas, Chimaev’s managed cleared the air on the matter to EPSN journalist Brett Okamoto. Okamoto later tweeted that the reports of Khamzat’s detainment were false after speaking to Shammas.

Chael Sonnen, who is famous for speaking his mind, shared an interesting story about Chimaev. Sonnen revealed that he does not believe the stories of Khamzat being stuck in Russia. The self-proclaimed Bad Guy then shared his reason for not believing the story.

“But this isn’t the first time that this has happened to Chimaev. And what I mean is there is a rumour and a story about him being stuck in some country and somebody took his passport. This was literally going on. The one time that I met Chimaev, I brought you guys this little social media piece. But Chimaev was stuck in some other country. I happened to be in Las Vegas, I happened upon the PI, there’s Chimaev, he’s standing right there. He’s standing right here in Las Vegas.”

“So I’m only sharing for you because now we’re seeing it again. And the evidence that Chimaev is stuck in Russia is that somebody put that on the Internet one time. But the proof that this time it’s true, is the fact that Chimaev has not gone out and made a video and told the world, ‘I’m not stuck in Russia.’ Instead his Manager came out and said no that rumour isn’t true. So I don’t personally believe that.”

Khamzat Chimaev was seen with the Chechen dictator Ramzan Kadyrov

Khamzat Chimaev is a good friend of Ramzan Kadyrov. Kadyrov is a very trusted associate of Russian President Vladimir Putin and Chimaev posted a picture with him. The timing of the picture was very interesting as Chimaev posted the pictures right after the reports of him not being able to leave Russia. Recently pictures of him sparring with Kadyrov’s kids have also come out.

However, that did not land well with the fans. In the pictures, Chimaev could be seen getting beat up by Ramzan’s sons. The teenage boys landed some very hard punches and kicks on the 28-year-old. It sparked a lot of speculation online as fans wondered about the circumstances, under which the photos were taken.

It was evident that Chimaev was holding back his true skills to make the teenagers look good. Ramzan is an extremely powerful man in that region of the world. So it is not surprising to see Chimaev obliging the dictator’s wishes. In reality, if Khamzat actually wanted to show what he was truly capable of, it would have put the kids’ health in danger.

As for the professional side of things, Chimaev submitted Kevin Holland at UFC 279 and sent him into temporary retirement. However, there is uncertainty regarding his future in the UFC. While he wants to fight at middleweight, UFC President Dana White is contemplating whether to give him another chance of fighting at welterweight or not. His weight miss of 7.5lbs at the last PPV has complicated things.