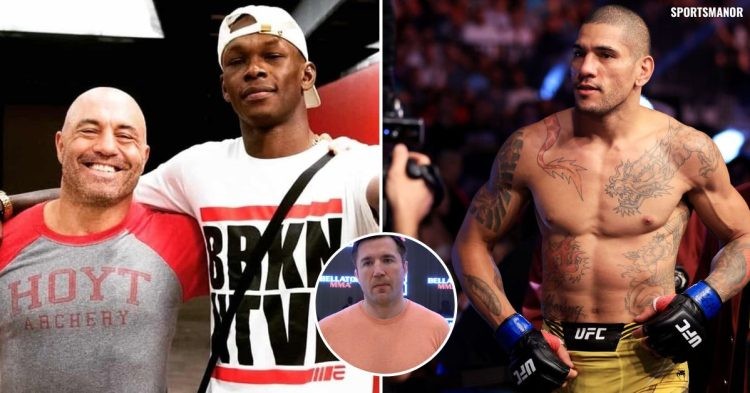 Chael Sonnen has hit back at Joe Rogan calling Alex Pereira’s weight at the UFC’s middleweight division on fight day “sanctioned cheating”. UFC commentator argued on his podcast that Pereira’s weight gives him a major advantage and as was the case against Israel Adesanya where Poatan picked up an impressive fifth-round stoppage win to become the new UFC Middleweight Champion.

Pereria reportedly weighed around 220 lbs less than 12 hours after the official weigh-ins, raising eyebrows over his size and weight advantage at the 185lbs division.

Now, Chael Sonnen has come out in support of Pereira and hit back at Joe Rogan for using the word “cheating”.

“If you are using words like that you better be specific. The rule in all 50 states and jurisdictions abroad, say you must make weight within a window, you must be below the weight class at a specific time.” Sonnen said.

“There is also rules on how you can rehydrate, how you can replenish. Were any of those rules broken and I am going to have to superpose that no, there’s not even a rumor that they are otherwise the word “sanctioned cheating” wouldn’t apply. It would have been just cheating.” He further added.

Shedding light on the rules of rehydration, and how a fighter can lose weight illegally by drawing out blood from his body among other methods, Sonnen supported Alex Pereira considering everything he did to make weight was legal.

It’s hard not to agree with Chael Sonnen. In the past, we have seen the likes of Robert Whittaker and Gilbert Burns due suffer because of weight cuts. Whittaker and Burns both had a lackluster outing in the welterweight and lightweight divisions respectively and found huge success after moving up a weight class.

Sonnen further made a case that Pereira is not moving up a weight class to avoid any kind of tension in fight camp with Glover Teixeira, who competes in the light-heavyweight division and is set to take on Jiri Prochazka in a rematch for the title at UFC 282.

Let’s do it again. Everybody wants to see it and I want to prove that I am still the best. @ufc @UFCBrasil @danawhite @jiri_bjp pic.twitter.com/OGzCk8YQ45

What are your thoughts on Alex Pereira weighing in the excess of 200 lbs on fight day? Do let us know in the comments section.