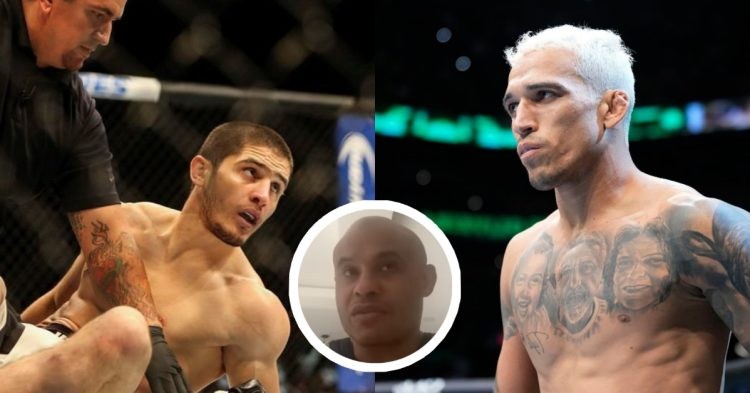 The UFC Lightweight division will finally get a champion at UFC 280. Islam Makhachev will go head-to-head against Charles Oliveira in the main event of the upcoming PPV. Ahead of the fight, Islam’s camp is sounding very confident about their fighter winning on October 22nd.

But recently, Makhachev’s manager has revealed the only way Oliveira can beat the Dagestani fighter this weekend. Ali Abdelaziz, who manages both Khabib Nurmagomedov and Islam Makhachev, had an interview with ESPN where spoke on how good of a fighter Islam really is!

Ali revealed that Makhachev has rolled with ADCC champions in the gym and has not been submitted. The 31-year-old has sparred with some of the best strikers and has also given a tough time to Khabib himself. So the manager thinks he will definitely win this Saturday. However, Ali is not counting out Charles Oliveira as he thinks there is a way for Do Bronx to win as well!

“Reality is like, you know Charles is a great fighter. He is a risk taker, it’s exciting. At the end of the day, it’s about winning. Can Islam win? Honestly, humbly, I respect Charles Oliveira, I respect his team. I think Islam is going to dominate him. I don’t think it’s gonna be even a close fight, on paper. The only way is Charles Oliveira can win, if he catch him with like a lucky punch.”

Khabib Nurmagomedov has been a big part of Islam Makhachev’s fight camp for UFC 280. Along with Javier Mendez, Khabib has actively guided Makhachev throughout the fight camp. That is understandable as they are cousins. But not only that, but The Eagle has also been very vocal throughout the build to the fight. Recently in a chat with Kamaru Usman and Henry Cejudo, Khabib made some bold claims.

The former undefeated UFC lightweight champion dismissed Oliveira’s grappling skills completely. He revealed that Islam Makhachev will ride Charles like a horse and beat him. The 34-year-old also stated that Oliveira has tapped “8 times” in the UFC to support his claim. But that is not accurate as Oliveira only has 3 submission losses in the promotion.

On top of that, Oliveira also holds the record for most submission wins the in the UFC. So it is obvious that Khabib is trying to play mind games with the 32-year-old. But Charles Oliveira seems unaffected by all the chatter as he wants to beat Islam and then fight Khabib. Even Oliveira’s coach Diego Lima wondered if Nurmagomedov can really stay retired if Oliveira beats Islam.

Things are definitely heating up as both sides are now engaging in verbal warfare. Both camps are confident about emerging victorious in the upcoming PPV, which goes down this weekend inside the Etihad Arena in the UAE. Who do you think wins between Islam Makhachev and Charles Oliveira? Let us know in the comments down below.