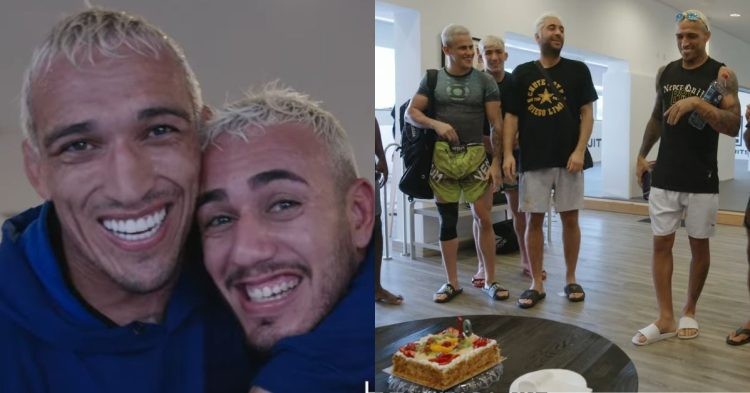 Charles Oliveira will be back inside the octagon this weekend on October 22nd to square off against Islam Makhachev in the main event of UFC 280. This five-round bout will be contested for the vacant lightweight title and will take place at the Etihad Arena in Abu Dhabi, UAE.

For this big main event clash, Oliveira along with his team arrived in UAE one week ago. The former lightweight champion is currently preparing for his matchup against Islam Makhachev at the KAF Jiu Jitsu center in Abu Dhabi.

As we inch closer to the PPV, the promotion released the second episode of the UFC 280 embedded series vlogs. This episode featured behind-the-scenes footage of Makhachev’s training routine and Charles Oliveira’s birthday celebrations.

Do Bronx who was born on October 17th 1989 celebrated his birthday along with his teammates and coaches at the KAF Jiu Jitsu training facility in UAE. The Brazilian lightweight was in great spirits as his brother Hermison Oliveira gave him a surprise visit on his birthday.

Oliveira’s entire camp was cheerful and the former UFC champion was breakdancing with his coach Diego Lima who also shared the birthday on the same date as Charles. Do Bronx was delighted with how things were going on and shared his feelings while speaking in the vlog.

On his birthday, Charles Oliveira was sparring with his teammates. Diego Lima who is his head coach had high praise for the Brazilian lightweight as he said that he has never seen Do Bronx like this before.

After hearing his coach’s compliment, the former UFC lightweight champion was pumped up and expressed his emotions while speaking in the UFC 280 embedded vlog. “I’m feeling like a monster,” said Charles Oliveira in the video.

Do Bronx looks in great shape and from the training clips that we have seen, he seems to be extremely focused on the challenge that is in front of him. Moreover, Oliveira is very confident of his chances at UFC 280 as he has predicted a KO or submission finish.

The Brazilian lightweight has been on an impressive eleven-fight winning run in the UFC. Therefore it would be interesting to see if he outclasses Islam and extends his terrific win streak.

Do let us know in the comments section below who you think will win the UFC 280 main event fight between Charles Oliveira and Islam Makhachev.