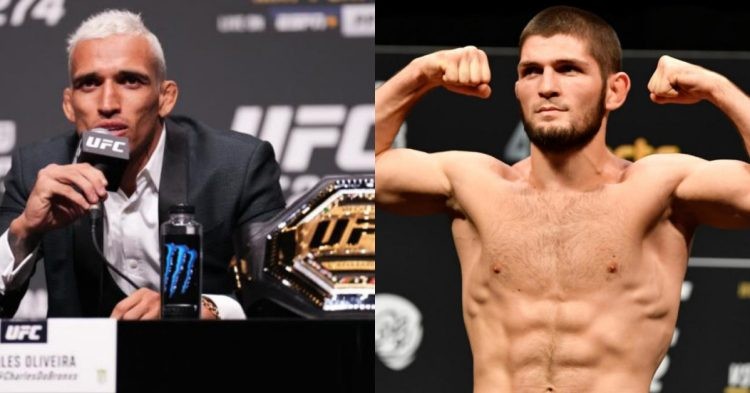 The initial reports suggested that Oliveira vs Makhachev will take place at UFC 281 in UAE. However, Charles wants the fight to be on his home turf. It is unclear at the moment as to when the fight may take place. But fighting Islam is just a step towards what Do Bronx really wants and that is to fight ‘The Eagle.’

On October 24th, Khabib Nurmagomedov completed his third title defence against Justin Gaethje at UFC 254. It took his career record to 29-0. There were a lot of rumours of retirement leading up to that fight. Following his win over Gaethje, Nurmagomedov confirmed that he was indeed hanging up his gloves.

Khabib’s popularity sore through the roof after beating Conor McGregor in 2018. The 33-year-old is regarded as the best lightweight fighter to ever compete in the UFC. Not only that, but he is in the conversation for being the greatest fighter of all time as well.

Despite being at the peak of his powers at the time of retirement, Khabib has insisted that he will not come back for another fight. But Charles Oliveira believes his plan may just work. Talking about it, Oliveira said,

Why does Charles Oliveira want to fight Khabib Nurmagomedov?

Khabib Nurmagomedov has repeated multiple times that Islam Makhachev has the tools to submit Charles Oliveira. As expected, it did not go down well with the current no. 1 title contender. Expressing his displeasure, Charles said,

“Khabib, You’ve already tried three premonitions about me and missed all three.” (h/t via The MacLife)

Nurmagomedov is Islam Makhachev’s cousin. Hence, it is not surprising to see him siding with Islam instead of Oliveira. But the Brazilian feels disrespected by the Dagestani. As a result, Oliveira wants to prove himself by going up against Khabib and earning his respect. Plus it is going to be a massive PPV seller as well.

Charles stated in a recent interview with The MacLife that he would much rather fight Conor McGregor instead of Islam Makhachev. It looks like he will not get his wish after all. Hence, Charles is already setting up the storyline for another big fight. But his motivation to fight Khabib is not merely for his financial gains.

As mentioned above, Khabib Nurmagomedov is the best fighter to ever compete in Charles’ division. A win over the divisional GOAT will immortalise his name in his history books of the sport.

Do you think Khabib Numragomedov will indeed come back if Charles Oliveira does manage to beat Islam Makhachev? Even if he does, will he be able to maintain the same dominance that he had in 2020? Only time will tell.